A South African based Muslim entrepreneur has decided to address social issues in the Muslim community through a hilarious strategy-based board game called The Middle Path.

The Muslim struggle is real. New data released by the UK Home Office show that hate crimes against people in the UK, because of their religious beliefs, rose by 40% in 2018, when compared to the previous year. Of that, 52% were directed at Muslims.

Similar trends are being seen across the rest of the Western World.

It doesn’t end there. Muslims not only experience hate externally,  but internally as well, from within the Muslim Community. Issues such as racial and gendered stereotypes, religious intolerance and labeling continue to plague the greater Muslim community. “How do we solve these Issues? Through Humour, of course”, says Ebrahim Vahed, a South African Entrepreneur and founder of Binaye Industries, a tech company providing innovative products, experiences and solutions to the Muslim consumer.

“Comedy has long been and still is, an effective way to bring about social change” he continues. “Whether it’s the Daily Show with Trevor Noah or Stand-up by Riaad Moosa (a renowned South African Comedian), these people change perceptions,” Ebrahim said.

Ebrahim created The Middle Path, which is a strategy-based board game about everyday Muslim problems. The Board game, which is currently crowdfunding on Launchgood.com, aims to reach $US5000 in order to get it into production.

The game consists of a board, player pieces and a deck of cards. Each card has been illustrated by a talented British Muslim artist, Asma, better known as “Mvzlamic”.

The aim of the game is to get your chosen character to “The Middle Path”. “After playing this game, you will be forced to confront this dichotomy of what the ‘Middle Path’ really means”, Ebrahim said.

According to Ebrahim, the response has been phenomenal. “We’ve had people pre-order the game, stating that they aren’t Muslim, which is awesome,” he added.

The crowdfunding campaign will end on Thursday 8 of November. They have opted for an All-or-nothing campaign, which means that they will only go ahead if they reach their target. Click here https://www.launchgood.com/project/the_middle_path__a_board_game#!/ 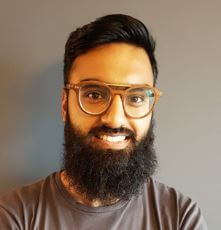 Ebrahim is the Founder of Binaye, a South African tech company focused on providing innovative products, solutions and experiences to the Muslim consumer.