Senator Fraser Anning’s remarks, during his maiden speech in the Australian Parliament on Tuesday 14 August 2018, in which he called for the restoration of “White Australia policy” and “Muslim ban” on immigration has been overwhelmingly rejected by Australians including politicians of all major political parties and various sections of the civil society.

His use of the word “final solution” against Muslims, used by Nazis calling for the genocide of Jews in Europe, has shocked people and has attracted worldwide condemnation.

According to a regular, large-scale survey of attitudes to migration run by Monash University, about 80% of Australians support a non-discriminatory immigration program.

In 2017, just 15.8%of respondents said it should be possible to reject migrants based on their race or ethnicity. Although the survey found negative sentiment toward Muslims was “relatively high”, the figure did not exceed 25%. “The reference in Senator Anning’s speech to the ‘final solution’ is a shocking, shocking insult to the memory of over 6 million Jews who died in the Holocaust,” said Mr Turnbull, adding that it was important “to call out racism.”

A large number of MP’s in the Australian Parliament condemned the views of Senator Anning and overwhelmingly and promptly rejected them the next day. “I am tired of fighting and tired of having to stand up against hate, against vilification, time and time and time again. The Parliament is united today in condemnation of those terrible words that were spoken in the other place yesterday.” 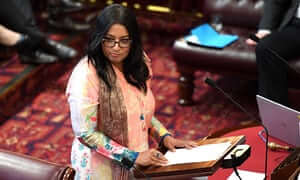 Dr Mehreen Faruqi, the former Green’s MP who will be joining soon Australia’s senate as its first female Muslim Senator.

Dr Mehreen Faruqi, the former Green’s MP who will be joining soon Australia’s senate as its first female Muslim Senator said that Australia’s future would be “stronger for our diversity”.

She said Senator Anning had “spat in the face of millions of Australians, spewing hate and racism” in his first speech to parliament.

“I’m a Muslim migrant, I’m about to be a Senator and there’s not a damn thing Fraser Anning can do about it,” she said. A Jewish MP, Josh Frydenburgh and Muslim MP, Ed Husic, children of migrants from minority communities in the Parliament showed empathy after this blatant racist attack embracing each other in the parliament the next day.

A Jewish MP, Josh Frydenburgh and Muslim MP, Ed Husic, children of migrants from minority communities in the Parliament showed empathy after this blatant racist attack embracing each other in the parliament the next day. Australia’s outgoing Race Discrimination Commissioner Tim Soutphommasane said a day after the speech, “I take no pleasure in saying this, but, right now, it feels like there has never been a more exciting time to be a dog-whistling politician or race-baiting commentator in Australia.”

During a lunch time Panel Discussion in Sydney city, organised by the Affinity Intercultural Foundation on Thursday 16 August, two prominent Australians condemned the view held and expressed by Senator Anning. The Hon Michael Kirby AC, the longest serving Judge in Australia said that he was appalled that in this day and age someone in Australian Parliament would hold such bigoted views. He said it was a bad day for Australia to hear the speech of Senator Anning last Tuesday. Emeritus Professor Ron McCallum AO, the speaker for the event started his address by rejecting Senator Anning’s comments outrightly and acknowledged that some people may have these racist views but they are widely condemned by mainstream Australia, a great success story of multiculturalism. “When politicians use race for cheap political point scoring, overt racism becomes normalised. This is not normal and we cannot we let it slide. He knew exactly what he was doing! Disgusting and divisive.”

“Senator Anning’s speech is not just academic to me – it is deeply personal and offensive, to all people from a diverse ethnic or religious background and to all Australians who love our country because of its diversity.

“To hear a term like ‘final solution’ used so flippantly sickens me.  How could anyone elected to the Australian Senate have such callous disregard for the feelings of communities so deeply and tragically impacted by one of the one of the most murderous fascist regimes in history?

“I hope that the outrage about this overt racist speech is not just one-off.  Casual, everyday racism, tolerated by many, is the breeding ground for intolerance and gives people like Senator Anning the misguided idea that what he has said is OK.  It is not OK. We need to be vigilant.

“Despite Senator Anning’s speech, I am very optimistic about our future as a modern multicultural nation.  I thank all public figures and MPs from around the country, in State and Federal parliaments for standing up for fairness, respect and decency.”