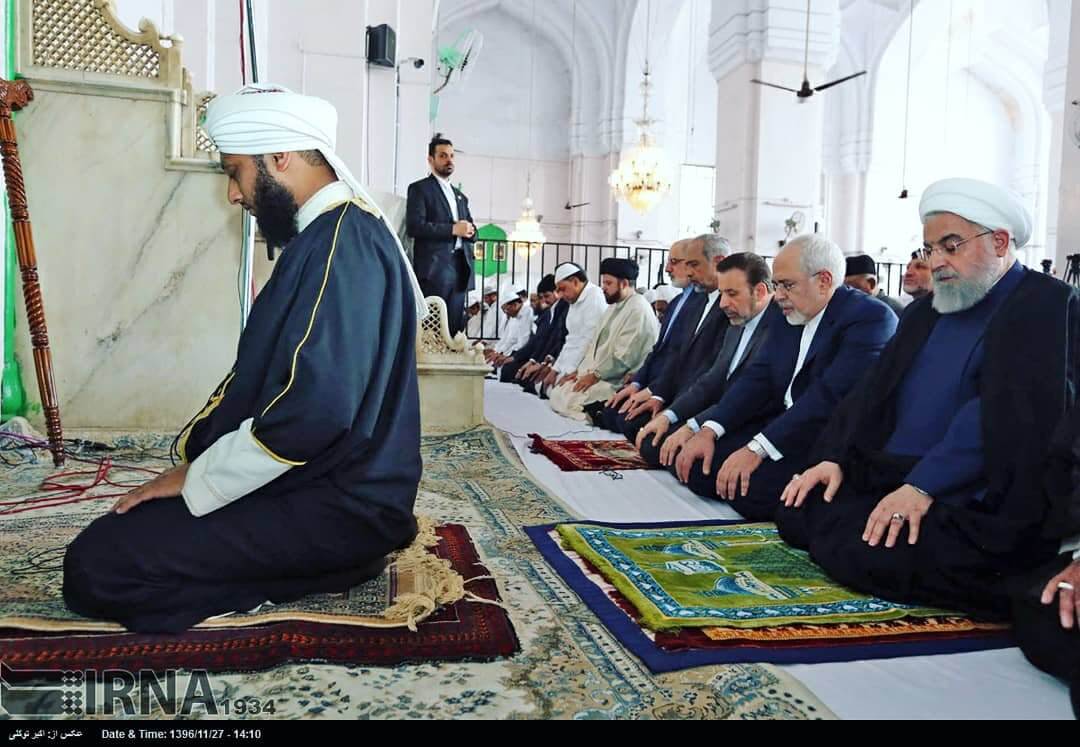 The Iranian President Hassan Rouhani had a 3-day state visit to India from 14-16 February 2018.

During his visit, he performed his Friday Juma prayers at the famous 17th century Makkah Masjid  in the city of Hyderabad, him and his full entourage praying behind the Mosque’s sunni Imam. Later he gave an hour-long speech in Persian focused on Shia and Sunni unity.

He also said that Iran seeks brotherly relationship with all Muslim nations of the region, including India.

He pointed out that Iran and India share a common historical and cultural relationship beyond political and economic ties.

Rouhani further said that Iran seeks more cordial and closer relations with India in all areas of mutual interest. He expected to hold talks with the Indian Prime Minister on trade and connectivity includes the strategically important Chabahar Port which could open up the transit route for India to Iran and Afghanistan.

Iran recently celebrated 39th anniversary of establishment of the Islamic Republic. Islamic Republic of Iran was established in 1979 after a referendum soon after the popular Islamic Revolution led by Imam Khomeini.

Today Iran is the beacon of Muslim unity. One of the revolutionary slogans was “La Shiya la Sunniya Islamiya Islamiya” (neither Shia nor Sunni but Islam). Iran continues to live up with this popular narrative of Islamic unity.

Iran seeks cooperation and friendly relationship with other Muslim countries who have time honoured relations with Iran. “We do not believe the bullet is a solution for differences”, said the visiting Iranian President. He further explained that Iran believes in dialogue and logic to overcome differences.

Rouhani used a metaphor in describing India as the living museum of different ethnicities and religious peaceful co-existing. He was addressing Muslim leaders and scholars of different Islamic schools of thoughts.

He emphasised that Muslim unity is a need of the time: Shia and Sunni believe in the same God, Prophet, Quran and Qibla (Muslim prayer direction). He stressed that the West created rift among Muslims by instigated certain groups and outfits.

He also said that Shias, Sunnis, Kurds and Christians have lived together peacefully in Iraq and Syria, until the West created a discord there to plunder the natural resources of the country.

Rouhani expressed Iran’s readiness to help Afghanistan, Iraq, Syria and Yemen. Iran wants to spread peace through dialogue and if needed Iran believes in resistance and steadfastness to defend her rights.

He emphasised that Islam is a religion of moderation, tolerance and forgiveness. Iran’s actions reflect these principals.

Even though Iran suffered during Saddam imposed eight-year war on Iran soon after the Islamic Revolution.

Today Iran is actively working with Iraq for its infrastructure and welfare development and there is a strong bilateral relationship between two countries.