The Aligarh Muslim University Alumni of Australia has strongly condemned the storming of the AMU Campus, earlier in May, by armed hooligans of a right wing Hindu organisation and subsequent brutal attack by UP police on protesting students.

The AMU Alumni of Australia in solidarity with a number of Aligarh Alumni within India and overseas have released statements urging the Indian authorities to investigate this matter, punish the culprits  and safeguard the security of the iconic institution including its staff and students.

Senior members of the  Alumni handed letters of concern, addressed to the Indian President Mr Ram Nath Govind and Prime Minister Mr Narendar Modi on Sunday 6 May to the High Commissioner of India in Canberra, Dr Gondane who assured them that they will be forwarded to the addressees.

According to the Aligarh SSP, on Wednesday 2 May, 10 armed militants associated with RSS-affiliate Hindu Jagran Manch and Hindu Yuva Vahini tried to force their way through the University gate, assaulting security guards.

They were shouting slogans and wanted to forcibly remove the portrait of Muhammad Ali Jinnah from the Students’ Union Hall and torched an effigy of him right then and there.

The university security with the help of students overpowered them and six of them were handed over to the police who released them within half an hour and refused to enter an FIR against them.

This resulted in serious injury to more than 30 students amongst them AMU Student Union President, Mashkoor Usmani, Secretary Mohammad Fahad, former Secretary Mazin Zaidi and many other taken to hospital bleeding from head and limbs.

According to University authorities, the extremist Hindu organisations have long been targeting Aligarh Muslim University, a national Muslim icon.

The RSS has been demanding to open one of its branches at the campus. However the portrait row was sparked by demand of Aligarh BJP MP Satish Gautam to remove Jinnah’s portrait from the campus.

According to students and university staff, the timing of the attack was to coincide with the visit and a lecture by the former Vice President of India Mr Hamid Ansari, an AMU Alumni as well as a former Vice Chancellor. The program had to be cancelled.

His wife, Mrs Salma Ansari was highly distressed by the event that she witnessed on the day and she commented as follows:

“We reached AMU for a lecture by Hamid Ansari sahab at 5 pm. Slogan shouting protesters started accusing Hamid Ansari of being the cause behind the Jinnah portrait. Some carrying swords, guns and knives stormed the campus. Police lathi charged the students who were trying to stop the outsiders from entering the campus. The programme was cancelled. A lot of police came. Saw the ugly face of what is happening. Saw the ugly face of the crowd. Very ugly and very threatening. Saw 200 people from the University Guest House. Never saw something like this. Hamid Ansari was Vice Chancellor. Studied there myself. In my own country, I feel like ….am I really safe. Where have we reached? The students were really badly beaten up by police. RSS members were caught and handed over to the police but the police did not do anything. Tear gas shells, lathi charge landed on the students. Never felt so insecure in my own country.”

AMU Students’ Union and AMU Teachers’ Association had complained that right-wing activists had allegedly planned to attack former Mr Ansari but this  was cleverly overlooked by almost all media outlets who focused their attention on the portrait of Jinnah and protest by students.

The Indian mainstream media portrayed as if the AMU students were fighting for Jinnah’s picture in support of Pakistan while right-wing activists displaying Indian patriotism.

The incident was dubbed by the media as the Jinnah-AMU row, rather than trespass on the campus by armed hooligans  breaching university security and perhaps a failed attempt to attack Mr Ansari with the help of UP police.

The  state of Uttar Pradesh is currently governed by highly communal elements of the BJP, with not a single Muslim in governments ranks while Muslims constitute almost 20% of the population in this most populous state of India. 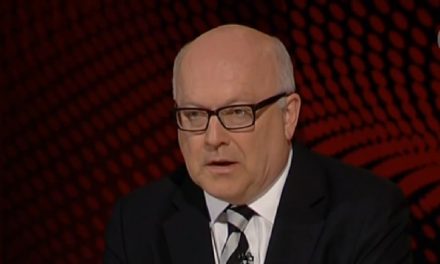