“How wonderful it is that nobody needs to wait a single moment before starting to improve the world”.

This beautiful quote by Anne Frank was the first thing to cross my mind after I finished talking to the co-founder of Shoebox 4 Syria on a bright Monday morning.

Several years ago, an enthusiastic community development worker – Khouloud Joumaa, along with her cousin Saphia Al Kakouni, driven by the spirit of giving, started Shoe Box 4 Syria — a Sydney-based, non-profit organisation for the children who are orphaned and displaced in Syria.

Now in its third year,  the organisation has had hundreds of students, from various schools across Australia, come on board to help make a real difference to the lives of their fellow young brothers and sisters suffering and struggling in Syria.

The venture seems to have tapped into a niche of brave little heroes, who in their humble capacity, have proved that age is no barrier when it comes to doing good.

Here are the 8 questions we asked to learn more about this initiative.

1- Tell us about your organisation?

We started in 2016. The idea was to engage the community, schools, and friends in offering charitable donations and gifts to the kids in Syria.

Saphia, my cousin, had seen the horrors of war first hand in Syria and knew better that the destructive aftermath of the war extends far beyond the battlefield. She considered herself fortunate to be alive and able to flee back to Australia with her kids, but there was pain she kept revisiting in her head— an anguish that she felt on witnessing the depravity of the entire situation!

So one day, Saphia rang me up on the phone, blissfully unaware of how this mutual pain could strike the chord it did, we both decided that no matter how small, we had to play our part in making life easier for the people in Syria.

2- Tell us how your past experience has prepared you in becoming the person you are today?

After being diagnosed with brain tumour and then making a remarkable recovery to battle my way back to fitness has lent me perspective, tremendous positivity and the willpower I needed to believe in myself and help others in distress feel better too.

Also, it was my role as a teacher and the love for the orphans that has helped laid the foundation of our initiative. I thoroughly enjoyed teaching and making a difference in children’s lives. It is an honour to be in this role.

3- How do you engage with various communities?

We have made full use of various social media vehicles; such as Facebook, newspapers, radio etc. We have also created short animated videos. Social media alone has helped us reach a wider audience. Word of mouth, family and acquaintances have been quite resourceful too.

4- Describe your passion for this mission?

In the wake of this initiative some years ago, I would’ve not imagined that my passion for giving would lead me to write a book one day. Writing for me is therapeutic and the message I want to convey via my book is to promote love not hate for we are all one. My passion for Shoebox 4 Syria has morphed into a creative outlet. 5- What are some of the obstacles you faced?

I would say its when people send used clothing items as gifts. Not to mention an element of financial constraints too but the community has been very giving and Allah creates ways and means from unexpected sources. All praise belong to Him alone.

Our team members from various projects, volunteers and some brothers from behind the scenes have raised funds for sending medical supplies’ containers to Syria and even upgraded the cancer ward in one of the hospitals in Gaza, Palestine.

I must admit, that considering all the conditions, this has been a truly humbling experience in that that not just Muslims but people from a myriad of cultural backgrounds and faiths have come forward and donated generously

7- Have you considered collaborating with other charities?

Keeping in mind the increased reach and resources as well as improved services, we would like to.

For us, however, the most important consideration of all is the potential value to the deserving people. We have never viewed our efforts as anything other than an opportunity to connect with the less fortunate in hopes that it’ll help us stay grounded in knowing that since Allah has blessed us abundantly, it is now upon us to share those blessings with our brothers and sisters in need. And Shoebox 4 Syria is the least we can do! 8- Is there a message you’d like to give to the community via Australasian Muslim Times?

To the community out there, I urge you all to give open-heartedly. Also, the Muslim Ummah needs to be united and let go of trivial, personal and ideological differences to prosper in this world and the hereafter.

Thank you Khouloud Joumaa for sharing your journey with us. 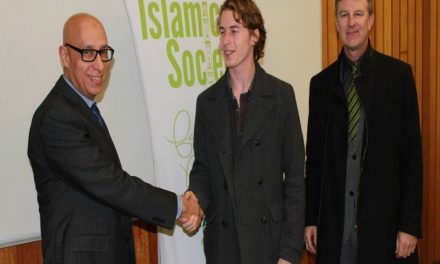