On Tuesday 13 February, I had the opportunity and the honour of attending the most dignified funeral of our family friend Mr Mark Blows, a clinical psychologist, musician and an interfaith leader, at the Gosford Anglican Church, who had passed away on Thursday 1 February 2018.

I was accompanied by my son-in-law, Dr Wali Bokhari for the funeral service. We travelled by train, an hour’s journey from Strathfield station and arrived 5 minutes before 10.00 am, time given for ‘viewing’ and were greeted by four smartly dressed female funeral directors who led us to the small formal old church building designated as the sacred space.

We first met Mark’s elder daughter Joanna and her Japanese husband, introduced ourselves in detail and then paid our respects by reciting Al-Fatiha in our own tradition and praying for Marks salvation and for his family. On the way out after viewing the body, we met Johanna and offered our condolences.

After the ‘viewing’ we were welcomed by Father Rod Bower, the Anglican priest at the Church who I had met at a number of occasions previously at interfaith gatherings in Sydney. The Gosford Anglican Church and Father Rod are well known for their support of Muslims, asylum seekers and refugees and have been targeted by bigoted hate groups, frequently covered by various media outlets.

Father Rod Bower took us for a brief tour of the main church hall where to my surprise, there was no furniture but wall to wall carpeting. Father Rod explained that he had the church benches removed in order to create a more flexible space and was often criticised by Islamophobes of turning the church into a mosque.

A large number of family and friends started arriving who went into the church for ‘viewing’ in small groups while we introduced ourselves, the only Muslims in our caps amongst a mainly Christian congregation.

At precisely 10.30 am, in accordance with the program, the funeral service commenced in the old church, St Marys.

I was struck by the dignity, discipline and decorum displayed at the event by the family members and all those present to mark the solemn occasion.

The proceedings included the singing of a hymn, readings from the bible, eulogies by family members, a  musical performance by his younger daughter Tamina and Rhianne Grieve, a cousin of Mark, playing a beautiful piece, “The Lark Ascending” by Vaughan Williams, on her violin before the coffin was taken to the hearse for private family burial. A number of people attending the service were invited to refreshments in the main church hall where we had some great conversation with members of the local community.

During his speech at the funeral service, Laurence Blows, younger brother of Mark recalled childhood memories in a most humorous but respectable manner as well as Mark’s exceptional achievements:

“Mark was studious. At University he studied psychology and music, these were crucial pathways to wisdom. He was one of the earliest practising clinical psychologists, innovative in the help he gave his clients, he was an inaugural member of the Australian Psychological Society, he read widely and examined many healing practices, past and present. He wrote books. He was surprised to find that Buddha used techniques of healing to relieve suffering about 2600 years ago. Mark and Johanna joined a world wide group “The Transnational Network for the Study of Physical, Psychological and Spiritual Wellbeing.”

Mark’s eldest daughter Joanna Hosoya during her address elaborated on her fathers working life and what she learnt from him:

“Dad pursued his own path. He was attracted to that which was not the suburban Australia of his childhood. He married my beautiful and cherished Dutch mother at 23 and they lived upon a shoestring in Blacktown. I was born on my father’s 25th birthday and my sister 14 years later.

Dad told me that we should be of service. He thought that the little man should stand up to authority and defend justice. You can understand his mind if you know that he also read widely and tried to learn about different cultures and religious thought. But I would not say he was an introvert.”

The final speech at the service was given by Johanna displaying the utmost love and respect for her late husband. She twice mentioned the name of my father and our family, evidence of closeness and mutual respect that we had developed during our interfaith interactions.

“I am very happy to see all of you here, on this very special occasion, to remember and honour Mark, and to celebrate his life Gathered here is such a variety of family and friends – Mark’s brother, our children,  several of Mark’s cousins as well as two of my brothers – and Mark’s grandson, Laurence.  Our granddaughter, Meriel,  will be coming next week!  Then there are the friends from our church,  who have given us so much support during Mark’s long illness.  There are also our musical friends, and two of a group of friends with whom Mark and I were associated in the  inter-faith group at Fairfield, with Dr. Ashfaq Ahmad and his great family.

Mark and I  first met at the University of Sydney, where both of us were studying psychology –in the hope of reaching some understanding of human life.   Mark was a serious young man,  he played the piano and loved the classics such as Haydn and Mozart, but especially, Beethoven, whom he used to see as  “Uncle Ludwig”, standing just behind him, near the piano, giving him his advice or comments.  (His mother was a piano teacher, after all!)

Mark’s life and mine have been inextricably linked since 1960, and then shared with, first, Joanna, and somewhat later, Tamina. It has not been easy, but it was often exciting and wonderful.  Our love seemed to me like a very deep friendship, vulnerable but alive.   I am truly thankful for our life together.

We travelled first to India, several times, a continent so colourful yet so starkly poor…. And yet, with such a rich religious life.  We were fascinated to observe the differences in culture and religions  – including Hindu, Buddhist, Islam and Sikh traditions’ Later we visited Europe to attend a conference at a monastery in Belgium,  of a group of psychologists, together with Father Laurence Freeman, relating psychology and spirituality.

Our interest in this field also led to our participation in the Interfaith Committee at Fairfield, where we had the honour of working with Dr. Ashfaq Ahmad and his family.

In closing, I would like to express my warmest thanks for the kindness, support and friendship, and the prayers of  our many friends in Christchurch and St Marys congregations.  Also for the very capable help of our daughter Joanna and our special friend Sadraddin..  And lastly, I am deeply grateful to Father Rod Bower for his fatherly, loving care for Mark and his prayers for us both, in our time of need.”

Mark completed his Memoirs in April 2013, almost 100 pages long with a number of photographs, reflections on his childhood, his professional career, his thoughts and ideas and stories of people he met and worked with.

I was able to obtain a printed copy at the funeral service and to my surprise, I found that he had devoted almost three full pages on my father, analysing his personality, thoughts and ideas during the relatively brief time he had spent with him.

Quoted below are some selection from his Memoirs regarding Dr Ashfaq Ahmad and ‘clan’:

“This story could never be complete without including Ashfaq. … Ashfaq is an elderly, very traditional Moslem leader who lives in one of the suburbs in the city of Fairfield. Authoritative in manner, he is indisputably the head of his clan, he is a patriarch….He was a lecturer in Engineering at the University of Sydney. He generates many interesting plans and ideas. Then having done that, he “leaves the rest to God.”…. We worked with Ashfaq for some years, in a group of people from diverse religious background, who were interested in dialogue between religious traditions. This work had been Ashfaq’s initiative, and he and his extended family put much planning and organisational skills into it.”

The same evening I passed on the memoirs to my father, 88,  who read it from cover to cover the same evening with great fascination and shed a few tears in the memory of his great friend, colleague and fellow traveller in life.

We pray for Mark to rest in peace and pass our condolences to his loving family. 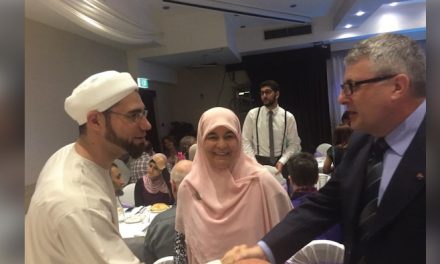