Australians, Amna Karra-Hassan and Assmaah Helal have made it to the 2018 Women in Sport Power List that includes 30 of the most influential Muslim Women in Sport from 20 countries around the globe who impact the lives of many.

Where the Muslim community is constantly in the spotlight globally, Muslim women are often being judged, and spoken about in the media, as opposed to being given a chance to represent themselves.

“This Power List showcases a diverse tapestry of professions within the sports industry and women from all walks of life, who represent 20 countries and together positively impact the lives millions across the world,” as described by the Muslim Women in Sport Network. 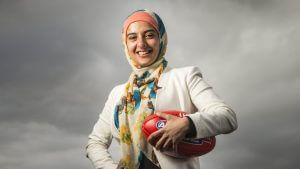 Amna Karra-Hassan, described as an “agent of change”, driving diversity and participation, she is an AFL Administrator, who founded the first ever Muslim women’s AFL team in Australia, the Auburn Giants.

Eager to play the sport, she searched for an AFL team in Western Sydney and found there was none. She took the initiative and started her own.

“I’m honoured to be recognised among the sports leaders and women who inspire me! It’s fulfiling to contribute locally to women’s sport, governance and leadership. It’s incredible to grow that passion and contribute to the conversation and influence change on a global scale,”  stated Amna Karra-Hassan. 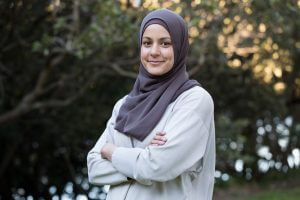 Assmaah Helal is an award-winning Program Administrator and Chair of the Commonwealth Youth Sport for Development, and Peace Group.

She was recognised for her innovative impact on women’s sport. She is also the Programme Operations Manager at Creating Chances, Football United.

“I am absolutely thrilled and honoured to be on the Muslim women in sport power list, listed among some incredible women around the world leading positive change in sport and society. It is about time we change the conversation about how we are portrayed in sport,” said Assmaah Helal

Along with the launch of the list, the MWSN is launching a Muslim Women in Sport Virtual Summit, ‘Innovators in Sport’, to be carried out between 4-6 May 2018.

The organisation aims to demonstrate the range of achievement of Muslim women as a minority in the Sports industry.

It also intends to shift the narratives in today’s context by not only reiterating the true strength of Muslim women but presenting role models for younger generations to emulate.

Registration for the summit is free and available at https://mwisn.org/conference-schedule/

Theresa Dyckman is a graduate of the SBS & NITV Mentorship Program. She is a revert, who is passionate about multiculturalism, and the need for diversity in the media.