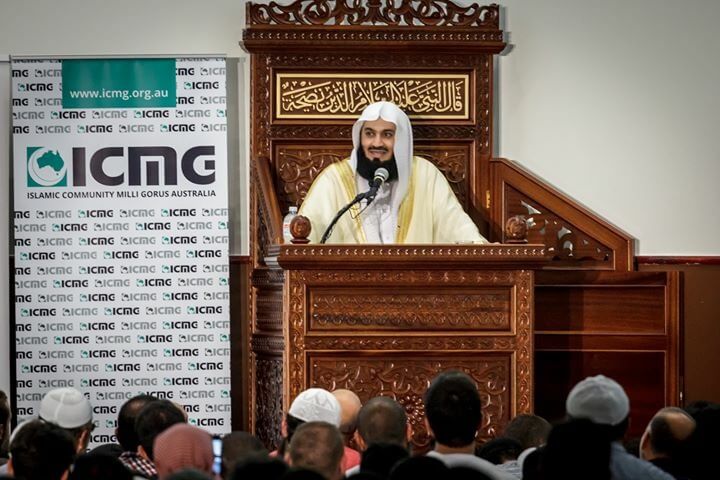 Mufti Menk has returned to Australia but this time, his lecture series tour has made a beeline towards Melbourne for the very first time.

Two Melbourne mosques, Islamic Community Milli Gorus (ICMG) in Meadow Heights and the Australian Islamic Centre in Newport had the pleasure to welcome him in Melbourne during the first week of February 2018.

He is a leading global Islamic scholar with a high profile in social media, particularly on Twitter. He has hundreds of videos on his YouTube channel and has even more followers.

Obtaining his Islamic education in Madinah, Saudi Arabia and holding a Doctorate in Social Guidance, the Mufti is well-regarded for his Islamic knowledge and charming charisma.

Speaking before two overflowing mosques, the sweet smiling Mufti began slowly in his usual manner but with no lack of vigour to a room full of enthused Melbournians. His main topic focused on the importance of taqwa or God consciousness. This he said, is most imperative to maintain within our lives.

We are all “connected” as human beings given that we are all from the bloodline of Adam. Hence, he said we should treat each other the way we would want to be treated.

The disease is to think we are better than one another. God has only created different tribes “so we can appreciate each other,” says the Mufti.

He also appealed to us to strive for the sake of God, no matter what circumstances we are placed in or what we may look like.

Speaking to the youth that they should appreciate the body that they have.

“This body is temporary,” he says.

“We must honour our bodies despite this, as Allah has created each and every person. Though, no one’s fingerprint is the same; as we are all uniquely fashioned by God.”

“Yet, you are beautiful, please believe me,” he pleaded to the crowd, and the room erupted in delightful laughter. Throughout his talk, he seamlessly interweaved his good humour into the speech.

However, the audience was truly overwhelmed with laughter at his jokes of his new-found appreciation for Halal Snack Packs (HSP).

Certain things are deemed as halal or permitted, whilst others are haram or forbidden. He integrated this within the story of Adam who was forbidden to eat from the tree within paradise and the importance of listening to the decree of Allah rather than the whispers of Satan.

“Turn back to Allah, when you make a mistake,” exclaimed the Mufti.

Ultimately, his talk was encouraging and uplifting, appealing to families and the younger generation, as the halls were packed with a youthful audience.

“I really connect to the Mufti, (he has an) amazing gift with speaking with the masses,” said Aisha.

The Melbourne crowd was encouraged by his visit, stating that he spoke very well and they were eager for him to return.

Ultimately, the most important message he reminded us was “Allah will always forgive you. Turn back to Allah. Have hope in the mercy of Allah.”

For “the best from amongst us are the most closest to Allah.”