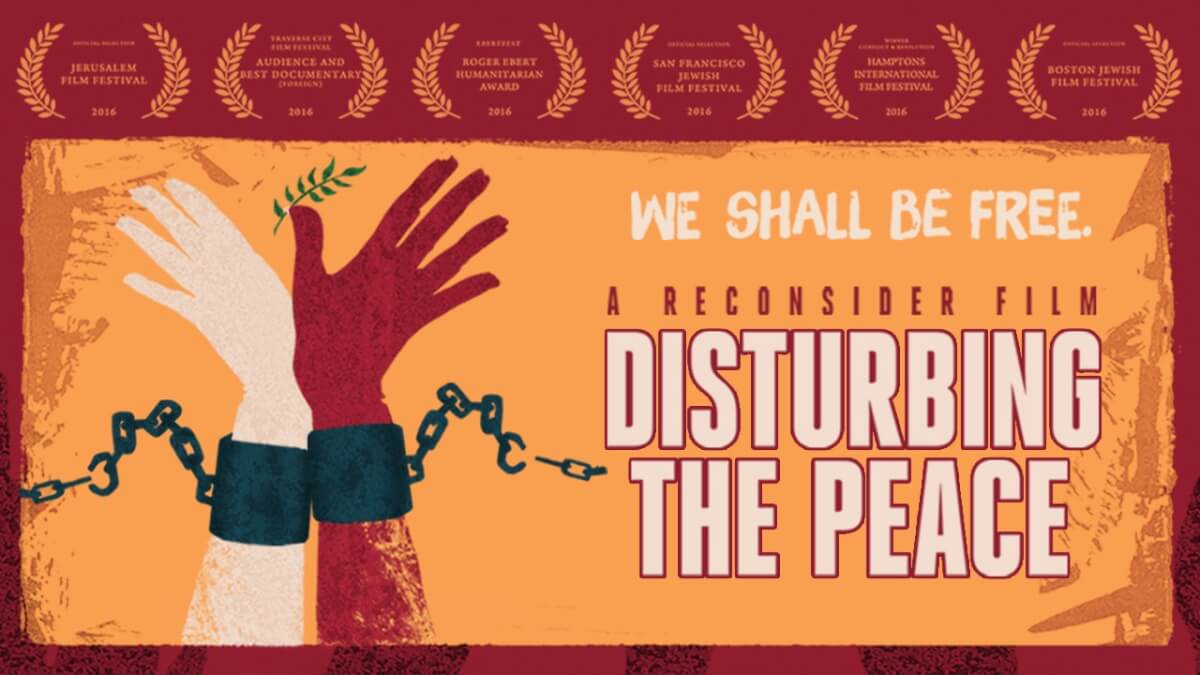 Completed in late 2016, the film “Disturbing the Peace” followed former enemy combatants—Israeli soldiers of elite units and Palestinian fighters, many of whom served years in prison—who joined together to challenge the status quo.

The transformational journeys of fighters/combatants from a commitment to armed battle to non-violent peace activists, lead to the creation of Combatants for Peace, a joint Palestinian-Israeli NGO committed to cultivating peace and promoting dialogue. The NGO was nominated for the 2018 Nobel Peace Prize.

Among the awards, the film has garnered are the New York Times Critic’s Pick and the first Ebert Humanitarian Award. The film challenges us to understand the narratives we live in and to decide what role we are going to play in creating a more humane world. It starts with our willingness to disturb the peace.

In front of a large audience last Sunday, the film raised important questions and included opportunities for structured and respectful discussions of the issues.

In her summation of the film, Vivienne Porzsolt said the movie was memorable and moving in a number of ways. “My major concern is that it treated the Israelis and Palestinians more or less as equals, whereas the truth is that the Palestinians are resisting a brutal, illegal occupation, which they are entitled to do under international law .” She then added: “Even more significant in my view than the film was the discussion afterwards and the fact that it was organised by people who have, and still often are, political opponents.”

Israeli Na’ama Carlin pointed out that 6 years prior she had her first real Palestinian meeting with Souli, the man who was one of the founders of Combatants for Peace. “As I see it the film sets out to show the humanity behind the conflict, staying away from factional politics and the language of blame  –  it demonstrates how people move away from violence and militancy and come to see their enemy as human, and later – as friend.”

In the process of moving forward, Shoshana Faire pointed out how she was touched by the film as it showed a ray of hope amongst what is going on, which is people driven by fear, anger and hate and the inability to see that those on the other side are simply people too. She pointed out: “Those who started it took a huge risk to meet together with the ‘enemy’ and through the sharing of their personal stories, the barriers of mistrust were broken and bonds were formed. They saw their commonality and their humaneness.”

And looking at a closer to home scenario, Alice Beauchamp drew attention to the impressive scene of husband and wife wrangling re the impending demonstration, symbolising the stand-off even within a family.

Many people viewed the screening as an optimistic and important film about the importance of understanding the ‘enemy’s’ perspective. Others were of the view that talking and working together is essential for peace, but early education and early collaboration by young people would far extend the power of this approach.

Sheree Waks, a fierce advocate for peace, said: “All of the people involved showed great courage in going against the views of the majority in their respective communities, and in some cases against their families as well, in standing up for what they believe is right.” She pointed out how many had undergone profound transformation in reaching the conclusion that the non-violent path is the most appropriate to achieving long-term peace with justice. “In the crazy world we live in, it is very important to have real everyday people like these as role models to inspire us all, when violence may be a temptation to those who seek quicker outcomes – non-violence requires patience, persistence, skill and commitment.”

And with those words of wisdom I will leave you with the final thoughts of Paul Reti: “For things to change, I have to change. For things to get better, I must get better.” What this means for today’s Palestinian people and today’s Israeli people is that they BOTH must stop wallowing in victimhood. Combatants for Peace, both Arabs and Jews, are showing proactively in trying to do just that.