Anniversary of Islamic Revolution marked in Sydney and Canberra The 39th anniversary of the victory of Islamic Revolution was held on Saturday 10 February 2018 at the Civic Theatre, Hurstville City Council in Sydney.

The program began with the recitation of Holy Quran by Qari Mustafa Ashrafi followed by both the Iranian and Australian national anthems.  Haji Hussein Dirani of Ahlul-Bait World Assembly, the organising body welcomed the guests.

Mr Shaoquett Moselmane MLC highlighted that Australian and Iran had strengthened its bilateral relationship through trade and culture.

Dr Tim Anderson from the University of Sydney highlighted the achievements of the Islamic Republic, such as longer life expectancy, excellence in education and scientific research, social justice and gender equality.

Father Dave Smith stressed that spirituality had empowered the Iranian nation after the revolution and said that his prayers would always be with its government. Dr Abdul Hussein Vahaji, Ambassador of Iran with the author.

Sheikh Nami Farhat said that Islamic Revolution changed the world order and protected Muslims in the region from terrorism.

Iran continues to endure decades of financial sanctions imposed on Iran by the world powers. Even today Iranians still suffer from the horrific chemical attacks carried out 30 years ago by Saddam.  Iran has been and remains a victim of many types of terror attacks.  Multiple Iranian nuclear scientists have been selectively assassinated inside and outside Iran.

Today the leader of the Revolution, Syed Ali Khamenei, himself is a living martyr. He survived an attempted assassination while he was leading Friday prayers.

Hanif Bismi presented a short history of the revolution during his speech. Dr Rahim Latifi the visiting scholar from Qum also addressed the gathering.

The main guest of the evening Dr Abdul Hussein Vahaji, the Iranian Ambassador presented the Iranian government’s achievements and how Iran empowers its neighbouring countries to protect their national security.  He said that Iran gives political voice and moral support to oppressed people around the world particularly the Palestinian people. The author presenting AMUST to the Consul of Iraq.

On Tuesday 13 February, the Iranian Embassy marked the occasion by hosting a dinner in Canberra at the Hellenic Club. Diplomats from various nations, Australian politicians and high profile bureaucrats as well as community leaders attended the event.

The evening also hosted the Australian Navy which is going to Iran as part of the bilateral agreement in April. This is an evidence that today Iran and Australia enjoy a stronger bilateral relationship. 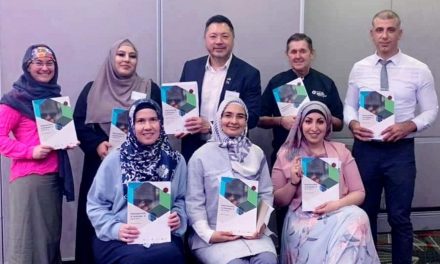 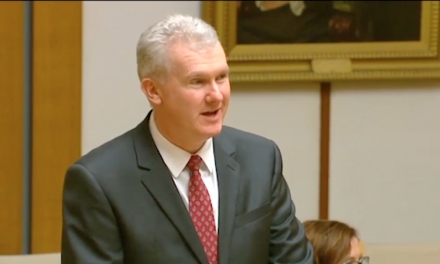