Aboriginal people had been living for more than 70,000 years on the continent we now know as Australia. Thousands of generations of these people had lived and died here.

Europeans from the thirteenth century became interested in details from Asia about this land in the South. From the sixteenth century, European cartographers and navigators gave the continent various names, including Terra Australis (Southern Land) and New Holland.

Captain James Cook from Britain raised the Union Jack on what is now called Possession Island on 22 August to claim the eastern half of the continent as New South Wales for Great Britain.

In 1788 Captain Arthur Phillip, commander of the British First Fleet of eleven convict ships from Great Britain, and the first Governor of New South Wales arrived at Sydney Cove on 26 January and raised the Union Jack to signal the beginning of the colony.

Now 26 January is designated as Australia Day. However, for the indigenous people of the country, it is Invasion Day.

I also believe that the union jack on the top left corner of the current Australian flag should be replaced by the Aboriginal flag.

My book – ‘Shadows of our Dreaming’ was written to pay tribute to all Indigenous Australians who had lived in Australia for about 70,000 years in harmony with nature.

A Star falls across the sky,

A man of the desert sighs “it is my heart”.

Over the darkened spinifex, to Baiamai he chants his joy

For his spirit place among the stars.

As star spirit leap and dance on the surface of Blackwater

So in the Brilliance above him, tonight his spirit is

This man is Djuringa touched, he will walk on his

As the eatern fringe of the sky grows pale and the stars fade.

Djuringa: This is an Aranda word meaning “all that is Sacred”. The word encompasses all sacred, symbolic objects including outcrops of stone, hills, trees, and so on, which are part of the landscape.

These objects are believed to be transformed heroes of the Dream Time. Myths and rites are also referred to as Djuringa, as they are the Dream Time heroes themselves.

The secret power of Djuringa lies in the veneration felt for it because it is the means by which life and power are transmitted to the individual from the Dream time heroes.

When a newly initiated man is touched by Djuringa, or sees and feels it, he is made aware of the eternal Dream Time. He becomes a part of the sacred life of his people and aware of the innermost mysteries which bind him to nature and eternity.

A man’s cult-totem is his personal “Dreaming”, his share or link with the eternal Dream Time.

Baiamai: Great God, Creator. This word comes from the language of the Wiradjuri tribe in New South Wales, whose dialect was one of the first Aboriginal languages of which Europeans obtained detailed information.

Before European settlement in Australia, the Aborigines spoke approximately 260 distinct languages, with many more associated dialects. 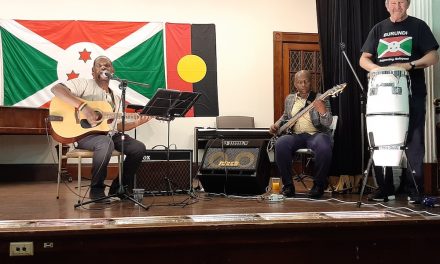