Whether Australia Day truly represents all Australians has been depicted as a debate between ‘Anglo’ and ‘indigenous’ Australians. Other Australians become marginalised. However, by acknowledging that on 26 January 1788 a thriving 500-year old Aboriginal-Asian engagement existed in northern Australia, characterised by respectful relations, strengthens a role also for Asian, including Muslim citizens.

“One of the greatest achievements of modern Australia is that all citizens, whether they achieved citizenship yesterday or were born here … are absolutely equal in their civic status and before the law.”

Muslim Australians have every right to critique prevailing western culture. Our future should not just be controlled by certain elite or racial groups.

All citizens can contribute to Australia’s development with positive aspects of their cultures and beliefs.

Australia should not continue as just an outpost of western culture but become a melting pot of Aboriginal, European and Asian influences.

‘Western culture’ is moving in an entirely new direction. So-called ‘progressive morality’ is not embraced by all.

While righting the wrongs of yesteryear, they want radical change without the deep thought about consequences.

Although accepting the outcome of the plebiscite on same-sex marriage, sizeable Muslim and Asian populations in western Sydney voted against it. This is understandable as time will tell whether it is beneficial.

Negative impacts, especially on Australian youth, as witnessed by reported increases in child abuse, severe psychological distress while youth suicide is at a 10-year high, represent a ‘wake-up’ call to challenge this western movement against traditional values.

Australia’s development owes much to efforts of colonial administrators and settlers.

We also record, however, serious mistakes. The treatment of Aborigines – oldest continuing culture on Earth – reflects poorly on western civilisation.

That colonial society in seeking to disintegrate Aboriginal communities was partially successful is witnessed today by the difficulty of Aboriginal societies to re-establish stable communities following removal of many of their laws, customs and tribal governance.

Concurrently, they are confronted by ills of western society – drugs, alcohol, gambling and pornography – that were not pervasive in their societies. Australians should minimise these questionable practices through a convergence of cultures to construct a truly Australian culture.

Logically we can draw closer to Asian neighbours rather than insisting on our ‘Otherness’ as a colonial descendent European culture.

Australians could adopt positive Asian and Muslim values such as the importance of the family and respects for elders.

We can promote a more intellectual and caring society that puts community benefit over individual desires.

Greg Sheridan wrote that “nobody alive today is either guilty of, or can expect redress for, an event that occurred 230 years ago. … If my father and grandfather were axe murderers, I am not an axe murderer, nor am I responsible for their crimes.”

This principle aligns with Qur’anic (7:164) teachings “No soul earns any (sin) except against itself.”

If however, you inherited land from an ancestor who killed the traditional owners, you have no right to it and it should be returned. If Aborigines defended their rights and were killed, their descendants become the true legatees.

Probably, in parts of Australia descendants of such colonials still hold these properties. Minimally, a treaty with Aboriginal peoples may resolve matters.

“Australia day celebrates our nation, of which, with all its imperfections, we have, all of us, every right to be proud.”

It can only be truly celebrated once effective remedial measures have been taken to provide full dignity and amends for past destruction toiled on Aboriginal people.

Our civilisation requires continuous improvement and refinement. This is every citizen’s responsibility. 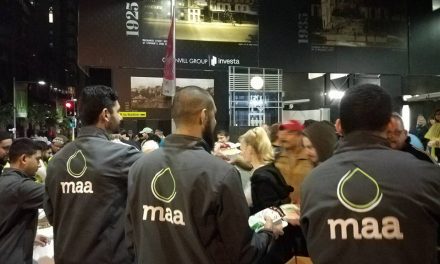