An Islamic Inspired Collaboration to Facilitate the Freedom of People taken Hostage because of their Nationality, Race or Beliefs.

While all Muslims cannot be obliged to apologise for acts of terror committed in the name of Islam, Muslims can be supported in taking steps to address actions impacting the good reputation of Islam.

One subset of terror correlating to the Islamic world is hostage-taking. According to the US State Department, hostage-taking accounted for 12,189 recorded acts of terror in 2015 exceeding all other types of terror.  The majority of those taken hostage are Muslim.

While it is not always helpful to judge the actions of those engaging in hostage-taking; it is required we address the impact their actions have on perceptions of Islam. Our response to hostage-taking has been muted. This is surprising given Muslims are the most charitable of people. A positive action would be to channel our collective effort into supporting hostages and their families. Surprisingly, we have never achieved this, then again, neither has anyone.

The response is reflective of the deafening silence that accompanies the media’s self-censorship and a recognition among politicians they are powerless against non-state entities operating as captors in far flung places where the rule of law has been ceded. Former Deputy to the United Nations Giandomenico Picco summed this situation up when he stated, “the first thing you think as a politician is I can get hurt if I don’t play it right – so the best approach is to do as little as possible, to say almost nothing, and to leave no trace of anything”. 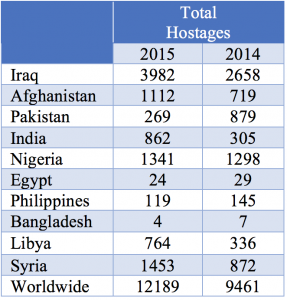 Top 10 Countries with the Most Hostages Taken 2015

The Report of the Australian Senate Select Committee on Responses to Kidnapping acknowledged “the Government must accept its limitations and assist others more suited to the task”.  Typically, any vacuum resulting from political inertia is filled by inter-governmental or not-for-profit organisations; not so hostage-taking.

The abdication of Government and respectable entities has created perfect conditions to sustain a thriving underground of insurance speculators and spooks with names such as Control Risks – who will send a shadowy gallery of ex-special force operatives to buy the freedom of wealthy corporate clients.

The fundamentals of the market apply to this business, the greater the rewards the more people get in on the game. The losers in this scam are the doctors, nurses and teachers taken captive while providing aid to Muslims and whose only value is a perception their capture will generate publicity. Except there is no publicity which means hostages are eventually released damaged or dead.

It is better for everyone, if the cloak and dagger deals characteristic of mercenaries are conducted within an ethical not-for-profit framework. This is where the TAKEN project kicks in, a Muslim led initiative to assist people held hostage because of their nationality, race or beliefs as leverage for political, ideological and/or material advancement for the purposes of funding the hostage-takers objectives.

The impetus for action can be found in the Holy Qur’an. The Qur’an requires those taken hostage be released by grace or ransom . The Qur’an does not condone the ill-treatment or killing of hostages; rather it requires Muslims deal kindly and equitably with people who have not taken up arms against Muslims or expelled Muslims from their homes.

The corollary of the requirement to treat hostages with respect is a duty on those Muslims who are able, to act on the hostage’s behalf to ensure their wellbeing and negotiate their release. The Qur’an is clear, “Allah loves the doers of good …  whoever saves the life of one, it shall be as if he saved the life of mankind”.  This is the direction TAKEN follows; seeking justice and fairness for all who have not fought or oppressed Muslims.

We have a duty to secure the hostages well-being and release. TAKEN is an advocacy and rights-based response to the hostage crisis inspired within the Islamic tradition. Its key objective is to campaign for the safety and wellbeing of hostages and their families. TAKEN presents an opportunity for Muslims to make a real difference and fulfil their obligations towards Allah and their fellow human beings. TAKEN embodies Muslim values, its actions an illustration to humanity of the requirement on all Muslims to do good.

TAKEN is looking for people wanting to make a significant difference, who can contribute knowledge, skills and resources to setting-up and running the organisation and building something meaningful.

The full version of this paper is available from the author  jim-nicholls@hotmail.com 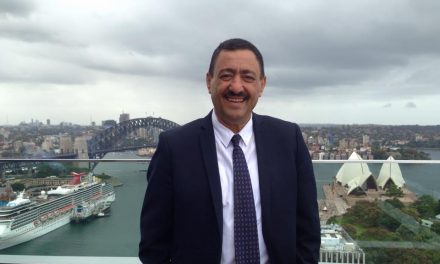