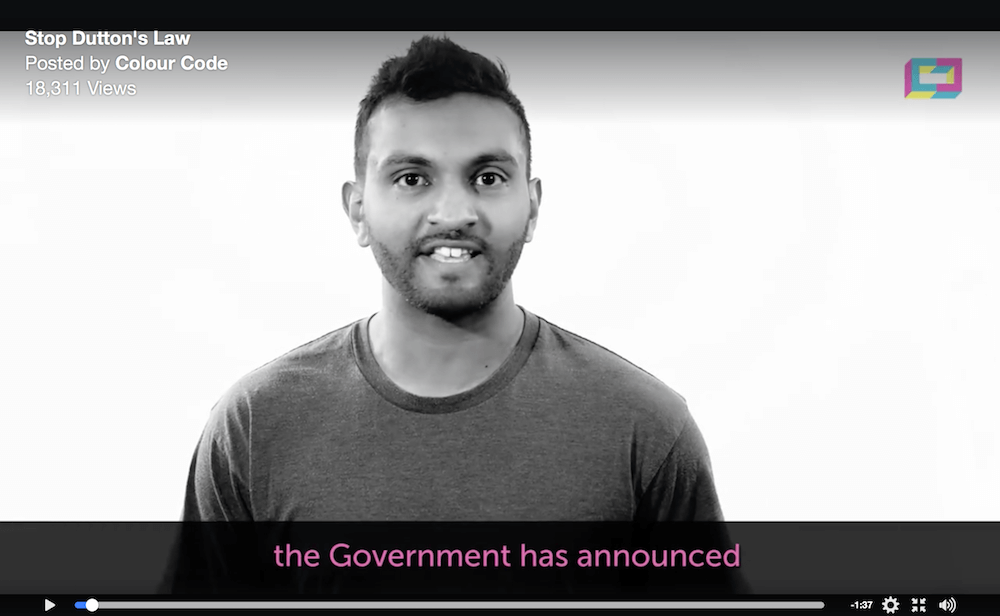 Powered by Get Up, Colour Code aims to provide a new space for minorities to speak, advocate and organise around issues of racial justice.

The black and white video comprises of 7 people speaking to a camera. Comedian Nazeem Hussain speaks assertively at the start of the video:

“By now, you’ve heard about the immigration changes that the Government has announced. Changes that will devastate many communities.

These changes include requiring migrants seeking citizenship to pass a university-level English language test that many native English speakers would struggle to pass. Requiring migrants to show that they are integrating into Australian society – a discriminatory measure that citizens both in Australia are simply not subject to.

Extending the permanent residency requirement for anyone seeking citizenship by four years. These changes have been suggested despite no actual evidence to show that they are even needed and with no regard for the harm, injustice, discrimination they will create towards those seeking to make Australia home.

These changes paint migrants as dangerous. These changes won’t just turn people’s lives upside down, this is a message to the broader community that immigrants are dangerous, suspicious and are importing social problems in Australia. It’s a lie and it always has been. The idea that people should speak perfect English before being allowed to come here before they are allowed to vote or be legally equal in this country, creates two classes of people making immigrants excluded and unequal.

It’s an insult to the generations of people who couldn’t speak English – but came here, contributed, worked hard to build lives and communities.

We’re not going to be scapegoats for this government, we want an Australia we’re all communities, are respected and valued. We’re going to come together to make sure that Dutton’s laws don’t become a reality.” #StopDuttonsLaw