Congratulations are in order for Amna Karra-Hassan, one of the fastest growing pillars of our community. The incredibly inspiring 28-year-old was announced as the Sports Winner celebrating InStyle and Audi’s #WomenOfStyle on Wednesday 17 May 2017 at The Star in Sydney.

“Celebrating the contribution of women @instylemag #womenofstyleawards.. the recognition in itself was incredible but to be awarded by @laynebeachley – a woman I admire and respect – wow. My life is filled with beautiful moments.” said Amna Karra-Hassan.

The awards honour some of Australia’s most inspiring and accomplished women across a range of categories. Karra-Hassan was amongst nominees including Olympic gold medal-winning rower Kim Brennan, Summer and Winter Paralympian Dr Jessica Gallagher.

“Trailblazers, role models and mentors, these inspiring women truly deserve to be recognised for what they do,” says InStyle Editor Emily Taylor. “I’m thrilled to announce such an impressive group as our 2017 InStyle and Audi Women of Style Awards nominees.” Amna’s post on Facebook received hundreds of likes, loves and wows from her family, friends and suporters. Women’s football star Amna Karra-Hassan, 28, was all smiles as she attended a cocktail party celebrating nominees for InStyle and Audi Women of Style Awards in Sydney this Sunday.

Have you met our founder, Amna?

Posted by Auburn Giants Australian Football Club on Thursday, 4 May 2017 Amna was interviewed by Hamish McLachlan and spoke very candidly about her family:

“I definitely inherited my dad’s good work ethic. He used to teach us to work for your employer as if it’s your business. I think that’s an outstanding work ethic. From my mum, I think adaptability. We lived in a very unique household where we had extended family stay with us. My grandparents came and lived with us when I was seven.” said Amna Karra-Hassan. Amna has partnered with Holden as part of their Supporting the Drivers of Change diversity and inclusion program.

What drives Amna: When people say “you can’t”, I focus on what I CAN do.  “Ambition. Competitiveness. I love a challenge. A sense of accomplishment. Passion – for sport, for change, for participation. Resilience. Self-reflection and purpose. Representation – as a woman, as a Muslim, as a Western Sydney sider, as an Australian of Lebanese heritage.” On the Department of Foreign Affairs and Trade, 2017:

Amna Karra-Hassan is an activist and advocate for diversity, inclusion and gender parity.

Amna works for the Australian Federal Police in the Reform, Culture and Standards portfolio responsible for engaging the workforce in cultural change.

She is the President of the Auburn Giants Australian Football Club and has pioneered programs for women of minority communities in Western Sydney.

Amna uses her influence to change the conversation on gender, culture, faith and representation. Australian of the Year Awards

Raised as the eldest of six children in a large Lebanese family in the suburbs of Western Sydney, Amna Karra-Hassan had no idea what Aussie Rules football was until adulthood. But as founder of the Auburn Giants and an ambassador for the Greater Western Sydney Giants national women’s team, Amna is playing an integral role in the growth of the game from the grassroots to elite levels. Amna’s team welcomes players from a diverse range of backgrounds, and is demonstrating how sport can be a great vehicle to promote social inclusion. Challenging traditional ideas of femininity, Amna has strong links with her community, often speaking at schools to help young people question and redefine gender roles. Amna is proud to bring people together, break down stereotypes and act as a positive role model and mentor to other young women in her community. Best of all, Amna is inspiring western Sydney girls from all backgrounds to get involved in sport – and in life.

Karra-Hassan gave a compelling talk at [email protected] 2015 titled Is “Football The Answer?”

A muslim woman fights the patriarchy by starting an all girl football team. Amna Karra-Hassan is the co-founder of Auburn Tigers Women’s AFL. Since 2009, Amna Karra-Hassan has been involved in coordinating activities for women in sport. She is a strong advocate for the rights of Muslim women and at the age of 23, she was involved in establishing a new women’s AFL team, the Auburn Tigers. An active leader in the community, she has worked for the Australian Federal Police Community Liaison Team and the NSW Youth Advisory Council. 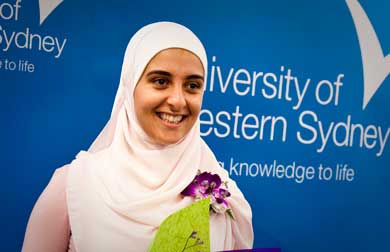 Amna Karra-Hassan was nominated for Young Women of the West Award in 2012.