Australian Year 12 students who achieved an ATAR score or equivalent of 90 or more in 2016 were invited to register for the awards earlier during the year.

An incredible 189 recipients, 54 more than last year, were honoured for their hard work and awarded certificates of recognition, tablet-notebooks and various other prizes at the nationwide events attended by the awardees, their families, school principals and teachers and business and community leaders. The ceremony in Sydney held on Friday 24 March at Himalaya Emporium awarded a total of 102 recipients (which included two from Queensland who are currently studying in Sydney).

The event was co-MC’d by Aya Al-Salti, a previous award recipient and Omar Al-Jamal, a Leadership Umrah Tour graduate. Speeches were given by The Hon Tony Burke MP, The Hon Jihad Dib MP, NSW Shadow Minister for Education, Dr Mohammad Al-Nakeeb from Al-Faisal College and Dalya Ayoub, a sponsor from Life Matters.

Award recipient Muhammad Yaseen spoke passionately about the need to pursue both career and life success. Raihan Hossain spoke about his participation in Human Appeal’s 2017 Aspiring Leaders Umrah Tour and the emotional experience of distributing much needed aid to Syrian refugees in Jordan. The Melbourne event held on Sunday 26 March at Laila Reception, Brunswick, 73 recipients were awarded. Sheikh Rabih Baytie, Human Appeal’s Melbourne Branch Manager welcomed guests and acknowledged the important role that parents and guardians played in the achievements of their children. He highlighted that more than 500 students have been awarded in Melbourne since its inception of the award program ten years ago. Award recipients Serra Mohamed and Mohammad Habbal both delivered eloquent speeches about achievement and emphasising that continuing education must be a life-long process.

In Adelaide, seven students were similarly awarded on Saturday 25 March at Hilton Adelaide. Branch Manager of Human Appeal’s Adelaide office, Ali Kadir welcomed guests and highlighted the organisation’s goal of encouraging and motivating outstanding achievement that will benefit the country. Hussein Mahmud, a graduate of the 2017 Leadership Umrah Tour spoke emotionally about his participation in the nineteen-day trip to Saudi Arabia, Jordan, Turkey and UAE.

With the ongoing expansion of the awards program, Brisbane hosted its first ceremony honouring seven recipients on Saturday 25 March at the IWAQ Hall, Springwood. Branch Manager of Human Appeal’s Brisbane office, Imam Akram Buksh welcomed guests and spoke of the importance of education and recognising both outstanding effort as well as achievement.

The event was MC’d by Ali Rane, a graduate of the Aspiring Leaders Umrah Tour and together with Furqan Ahmed, they reflected on their experiences participating in the once-in-a-lifetime tour.

Fahim Khondaker from the Islamic Council of Queensland spoke with enthusiasm about the future and the need for entrepreneurship by young people.  Other speakers included Habib Jamal from the Islamic Society of Gold Coast and Dr Zac Matthews. Three videos were shown including Human Appeal’s 25th Anniversary, Leadership Umrah Tour 2017 and Winter Aid Distribution 2017. Overall, the four separate ceremonies held over one weekend in Sydney, Melbourne, Adelaide and Brisbane were a fantastic opportunity for parents and communities to celebrate with joy in the proud achievements of these amazing 189 individuals.

“Human Appeal International Australia congratulates the award recipients as well as all the year 12 students of 2016 who put in their best efforts. A special vote of thanks goes to the generous businesses and organisations that sponsored the 10th Annual Year 12 Muslim Achievement Awards of 2017,” concluded Mr Bashar Al-Jamal. 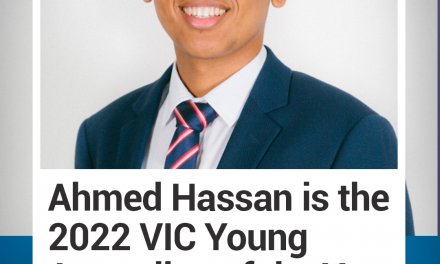