In April over 70 families, incorporating over 200 women, men and children, attended the most recent of the renowned family camps held by the Islamic Forum for Australian Muslims (IFAM).

The camp, held at the Cataract Scout Park in Appin, southwest of Sydney, was conducted from Friday 21 April till Sunday 23 April in what could be described as the perfect camping weather. IFAM, nationally and by state, has run dozens of camps over the years.  This get together, the 7th national family camp, in particular brought together IFAM’s members, their families and friends from different states to be their largest camp to date.

Whilst the program was comprehensive, there was significant free time for the participants to allow them to rest, play or explore the beautiful surrounds of the scout park.

The days started with Fajr prayers followed by Darse-Quran.  A lengthy break then allowed for early morning activities (or an extra sleep for some!) before a hearty breakfast.

The youth had their complementary program which included collaborative educational as well as team building and physical activities. Then there was a variety of talks throughout the day including a very enlightening discussion led by Dr Zachariah Matthews of Deen Academy on the role of sleep quality in increasing productivity. The entertaining and engaging presentation drew upon mutually corroborative scientific and Islamic concepts to conclude with a request for a commitment to change to adopt certain behaviours and habits.

This was followed by a presentation by Monir Hossain, Secretary General of  Islamic Practice & Dawah Council (IPDC) on IPDC’s organisation, goals and activities.

The last talk before break for lunch was given by Professor Shahid Hashmi, guest speaker from overseas who addressed both men and women and mainly talked about family relationships. He emphasised that although we are responsible and accountable individually for our actions, the building blocks of a society consists of the family, husband and  wife who provide a nurturing environment for the next generation. On being questioned on his opinion regarding a man having more than one wife, Professor Hashmi emphatically said that a natural family consists of one man and one woman considering the ratio of  global population at all times of males and females being 1:1.  Islam also envisions a family of a husband with one wife, only allowing exception to this rule under special circumstances with moral, social and legal restrictions.

Particularly exciting for the children was when the pony rides, jumping castle and other kids activities turned up. There was a talk by Professor Shahid Hashmi again on Sunday prior to a presentation and prize giving to the kids. Also amongst the notable speakers was Dr Ahsan Zaffarullah who provided an inspirational talk on Sunday morning after Fajr.

The camp concluded with remarks from the IFAM President, Rais Khan.

“This weekend we have all exchanged views, gained knowledge and enjoyed Allah’s barakah. It is now our responsibility to implement what we learned,” he explained. In the quest for continuous improvement, IFAM requested attendees to submit feedback online.

“JazakAllah Khair for delivering the most successful Family Camp so far. An overwhelming number of participants joined the camp and pony rides and food stalls were a new addition along with usual things including book stall, programs for children, youth, women and all.” A team building exercise for children with Shafqat Ali.

“Great food as always,” he remarked.

IFAM will continue to host such camps around Australia. Those wanting to attend should contact IFAM through their website www.ifam.org.au. 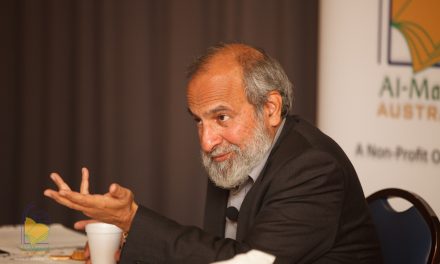