No compassion in Nazi and racist philosophies The spread of anti-Islamic and anti-Muslim propaganda and the establishment of a myriad of anti-halal, Islamophobic organisations in Australia, as well as in the USA and Europe, give justifiable cause for concern to Muslims and all defenders of inclusive democracies.

What is quite startling is that some of these self-proclaimed “Patriot” groups have individuals wearing swastikas in their public demonstrations and make strong supporting noises in favour of white supremacy.

On 15 February we commemorated the Fall of Singapore to the Japanese invaders, when they were part of the Axis Powers attempt to assert world domination. Thousands of our Australian soldiers were captured and later worked to death as slaves on the Burma Railway.

To the Japanese of the day, the swastika was a symbol of their ally. Hitler in Mein Kampf  even allocated Aryan status to this Asian nation.

Many of the younger generation are unaware of the nature of the Japanese and German Axis powers and the philosophy which guided them.

The philosophy of the Nazis was summed up by Hitler in Mein Kampf:   ‘A stronger race will drive out the weaker ones, for the vital urge in its ultimate form will break down the absurd barriers of the so-called humanity of individuals to make way for the humanity of Nature which destroys the weak to give their place to the strong.’  Compassion  must be eradicated from the master race.

The philosophy of these aggressors is in stark contrast to the Islamic message. The most frequently occurring word in the Qur’an is ‘ Compassion’. Each of its 114 chapters, with the exception of the 9th, begins with the invocation ‘In the name of God, the Compassionate, the Merciful…’  Because God had created man in His image, compassion is an intrinsic part of the human spirit.

The Quran is clear about the nature of national and ethnic differences.

O humanity! We created you from a single (pair) of a male and a female and made you into nations and tribes that you may know each other (not that you may despise each other). Truly the most honoured of you in the sight of Allah is (the one who is) the most righteous of you. And Allah has full knowledge and is well acquainted (with all things). [Surah 49 Hujuraath Ayah 13]

Hitler thought very differently. He wrote that racial mixing was “… nothing else but to sin against the will of the eternal creator.” Indeed the ‘lower races’ were to be enslaved. “It is certain that the first culture of humanity was based less on the tamed animal than on the use of lower human beings. … For first the conquered warrior drew the plough-and only after him the horse.”

The horrors which resulted from the perverted ideas of Adolf Hitler were reported in “The Scourge of the Swastika” published in 1954 and again in 2002. Written by Lord Russell of Liverpool it was compiled from the evidence given and the documents produced at various war-crimes trials, and from statements made by eye-witnesses of war crimes to competent war crime investigation commissions in the countries where they were committed.

“During the war, on the lowest computation, twelve million men, women and children from the invaded and occupied territories were done to death by the Germans. At a conservative estimate eight million of them perished in German concentration camps.”

Jews, slave labourers no longer fit for work, many Russian prisoners of war, people rounded up as hostages, were taken into these camps where they were tortured and murdered. Vile medical experiments carried out on prisoners, many without any medical purpose, were carried out in camps like Dachau. The list of horrors is almost unbearable to read. Odette Sansom, an inmate of Ravensbruck, testified that she had heard living people being put into the crematoria alive.

“The murder by the Germans of over five million European Jews constitutes the greatest crime in world history. That the total Jewish population of Europe was not exterminated is due solely to the fact that the Nazis lost the war before they could bring their ‘final solution of the Jewish question’ to its conclusion.” [Ch VII the ’Final Solution’ of the Jewish question. The Scourge of the Swastika.]

Such horrors are the fruits of notions of racial superiority and the denigration of those considered of “lower races.”

Islam came to guide us away from such evil notions but we can see evidence of the resurrection of this ideology emerging around us. Human beings are able to learn from their experience so it is unlikely that such philosophies will regain authority in the 21st century. Reflecting on what my Masters meant for me 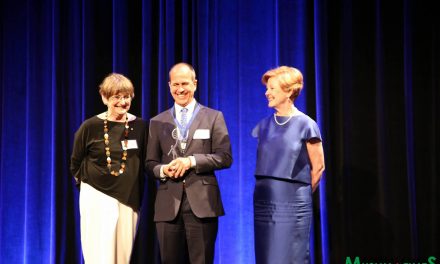 Farmer And The Wife Using The Tablet