The Lebanese Muslim Association (LMA) organised a Youthink Panel Event on Saturday 14 May with the “Mainstream Media: Enemy or Ally” at their function centre in Wangee Road, Lakemba.

The discussions covered a number of issues including Muslim community engagement with mainstream media, Muslim representation in the media, response to crises (overseas/local), and differentiating between conversation within the community as well as outside the community. The discussions were regulated by the MC,  Sara Saleh who directed it to a diverse line up of panelists including Dr Alana Lentin, Associate Professor in Cultural and Social Analysis at University of Western Sydney, Dr Mehal Krayem, PhD in Communications: Arab representation on Australian screens, Widyan Fares, Senior Writer for the Point Magazine at Multicultural NSW and Lydia Shelly, solicitor with the Supreme Court of NSW and high court of Australia.

What would be the end goal of engagement with media and what are we trying to achieve as members of the community? was a question posed by the MC.

While there are a number of individuals in the community that speak to media, however, “not necessarily because they always want to, but because sometimes they are the only people who are willing to” said Widyan Fares.

While speaking about community representation, Lydia Shelly said “The large majority of community leaders that do engage are very conscious of the fact that a larger portion of the Australian population will take their comments as being reflective of the broader Muslim community, so that’s why they often have to think twice about the topic on which they’re engaging, who they’re engaging with and on what terms.”

Dr Mehal Krayem said “Our primary responsibility should be for caring for one another, not towards convincing others that your friend or your brother is not a terrorist. And we don’t take that responsibility of caring seriously.”

Widyan Fares  shared her research findings where all women she interviewed who were somehow engaged with the media suffered from some sort of mental health issues, marriage breakdowns downs or were stressed due to community backlash.

“We need a safe space for our media spokespeople to come together and talk about their experiences, what has worked and what hasn’t worked”, she said.

“I’m highly critical of laws that have been brought in purely to disproportionally target, especially young Muslim men in our community and to essentially just see them as a prism of radicalisation and criminality.” said Lydia Shelly. 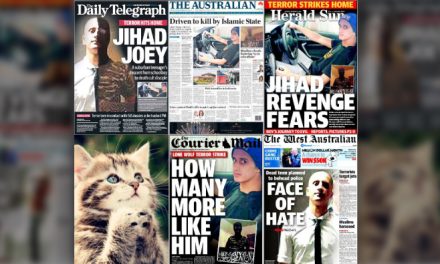