Hamza Khan, Shihaab Azam, Olivia Hutley and Kelsey Matushcka, are the first Australians ever to win one of the four divisions at the Conrad Spirit of Innovation Challenge held on 20-24 April 2016 at NASA in Florida, USA.

They are members of Team Enlighten, Year 11 students at Brisbane’s St John’s Anglican College.  St John’s is the only school in Australia to make the semi-finals two years in a row.

The competition included four divisions; Aerospace and Aviation, Energy and the Environment, Cyber Technologies and Security, and Health and Nutrition.

The spark for this idea originated when Hamza and his mates were using their phones late at night and realised that their smartphones were having a detrimental effect on their sleep. The team decided to design a viable solution in the Health and Nutrition category of the Innovation Challenge.

The winning team proposed the idea to develop a mobile application to control the colours of mobile devices to eliminate anxiety, poor sleeping patterns and stress.

Their ‘Lumos App’ idea is based on studies that show extensive amounts of exposure to lighting patterns on various devices that can lead to physical and mental issues.

The students will be offered help to establish patents for their app and also private entrepreneurial and marketing support which will assist in taking their ideas to the market.

Their teacher, Mr Nathan King was awarded the prestigious Teacher of the Year award. Mr King is the first teacher from outside of the US to win this award.

All 20 students who attended the Conrad Spirit of Innovation Challenge took the opportunity to tour the Kennedy Space Station, the Atlantis Shuttle Exhibition and the Saturn V Rocket during their time in Florida. The competition also allowed students to network with astronauts Captain Kathryn Hire, Jon McBride and Bob Cabana, Director of NASA.

Through networking, many students from St John’s are also looking at partnering with other schools from Asia and North America to further develop their ideas.

Hamza is the son of Dr Javaid Khan, a researcher at the University of Queensland and Mrs Zeba Khan, a teacher at the Australian Islamic College, Brisbane.

The Conrad Spirit of Innovation Challenge began in August 2015 with over 500 students from 16 countries joining together to create concepts, products and services to benefit humanity.

Of those, an astounding 140 teams submitted projects.  With the help of judges, over 110 teams advanced to the semifinals.

These teams tackled an amazing challenge – creating business and technical plans and graphic representations for products that, only a few weeks before, were conceptual ideas. 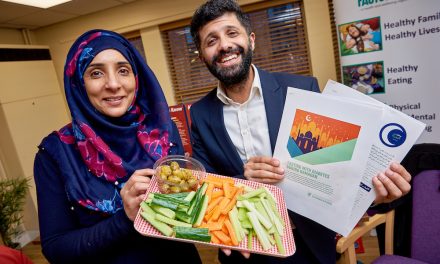