Forum Australia brought together some of the best minds in international aid on Wednesday 28 February in Canberra to discuss answerability in the programs and industry.

Titled Australian International Aid: Accountability and Transparency, the forum and dinner, held at Taj Agra Restaurant in Dickson, had government and NGOs discuss how their respective organisations provided this accountability.

A sumptuous three course dinner was served by Taj Agra during the forum.

More than 60 attendees heard from Kathryn Elliott from the Department of Foreign Affairs and Trade (DFAT), Emily Wilson from the Australian Red Cross and Sam Zappia from Care Australia.

Professor Bill Maley from the Australian National University (ANU) also provide some insight to the link between aid and diplomacy.

The Master of Ceremonies for the evening was Siobhan Heanue from ABC Television.

As Ms Heanue introduced the speakers, highlighting their qualifications for speaking on the topic, she also recounted her experience from the Nepal earthquake and the observation of how aid was applied on the ground.

She first introduced Kathryn Elliott from DFAT who outlined the steps DFAT take to ensure Australian aid dollars are delivered to those targeted. Whilst identifying the aid that is provided, Ms Elliott made the point that “Aid alone is not enough”.

She added that DFAT manages the aid program “to ensure that our funds are effective, accountable and deliver results” using the Performance Framework for the Aid Program.

“At the project level, we have a robust quality system to ensure that funding is directed towards making the most difference”, she explained.

“Probably the most well known component . . . International Committee of the Red Cross and Red Crescent.  The ICRC . . . are really the custodians and guardians of the international humanitarian law which is essentially the laws of war”, she clarified to the audience.

Professor Maley, of the Asia Pacific College of Diplomacy at the ANU spoke of the “tension between the recognition that transparency in the abstract sense is a good thing for ensuring the quality of program delivery and on the other hand typical reluctance of some people to endure the burden of responsibility.”

The final speaker was Sam Zappia, the Manager of Country Programs Team for Care Australia, ACT.

Mr Zappia pointed out that “there has been an extraordinary revolution in the world in the past few years . . . in health, education and living standards . . . for the first time in the world’s history less than 10% of the world’s population live in extreme poverty. However there is more to do.”

“The majority of the poorest people in the world are women and girls,” Mr Zappia reminded the attendees.

A long question and answer session at the end further strengthened the debate.

At the end of the evening Forum Australia presented the restaurant with a certificate of appreciation in recognition of the long term involvement with the forums.

Photos and full videos of the speeches and question and answer sessions can be accessed through the Forum Australia website: www.aussieforum.org.

Forum Australia’s next forum at the end of April will be on the perplexing refugees and asylum seekers issue. 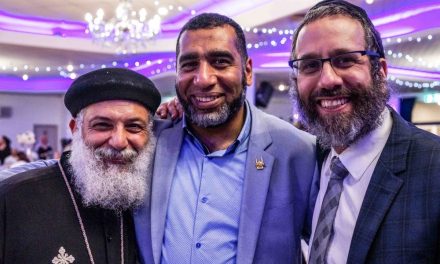