God’s peace and blessings be upon our beloved Prophet Muhammad, the Mercy to the World.

Even mentioning ISIS and the Prophet in one phrase seems so disrespectful to Islamic sensibilities. However, a question must be asked, does ISIS represent Islam as lived by the Prophet Muhammad?

This chart makes it clear that the terrorist group does not. 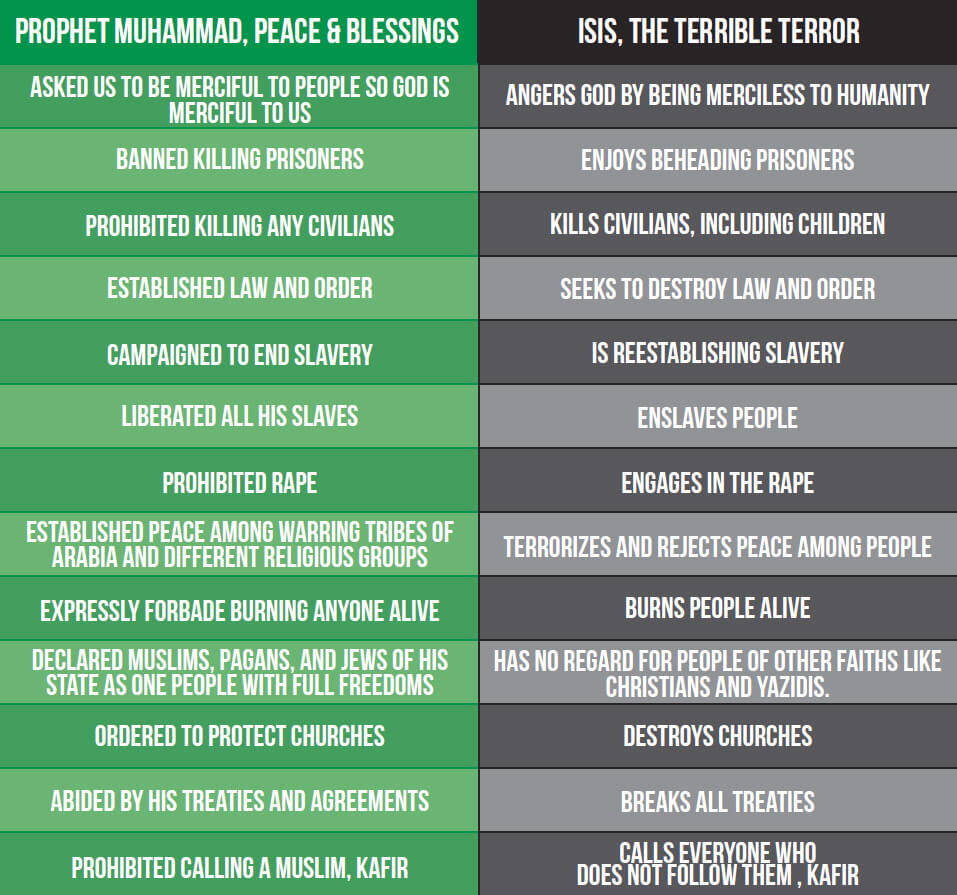 Prophet Muhammad, God’s peace and blessings be upon him, came to establish peace, justice, law, and order by inviting humanity to One God for All. As the table above notes, ISIS is diametrically opposed to everything he taught and expected his followers to adhere to.

ISIS does not represent Islam or Muslims A large number of Muslim scholars worldwide (http://www.lettertobaghdadi.com) have already articulately refuted the arguments and rationalizations put forth by ISIS that their crimes are “Islamic”.

As well, most Muslims have nothing in common with ISIS; in fact, the overwhelming majority of ISIS’s victims are Muslims. That is why the majority of Muslims hold a very poor opinion rating of the terrorist group.

(www.history.com/topics/ku-klux-klan) in the United States or the Lord’s Resistance Army in parts of Africa. ISIS should be treated as a grotesque aberration from Islam as the KKK and the LRA are considered aberrations from Christianity.

ISIS is political, not religious, as was the America’s disastrous invasions of Iraq and Afghanistan.

By using clever imagery steeped in Islamic symbols, ISIS has sought legitimacy for its criminality through religion as did KKK.

The reality is that this political movement for revenge and power has violated, on countless levels, the very teachings of the faith it claims to represent. It is an aberration from the guidance of Prophet Muhammad, whom Muslims the world over love, respect, and cherish not only as a Messenger of God, but as the epitome of love, mercy, and justice.