The UNSW Islamic Society (ISOC) has awarded its inaugural scholarship to Joel Stellar, a final year Bachelor of Science student majoring in Geography for his commitment to social justice, and demonstrating academic merit and leadership.

The $5000-a-year scholarship was launched last year at ISOC’s 45th anniversary celebrations. “When I found out more about the society and how the money for the scholarship was raised from donations during Friday morning prayers, I felt incredibly honoured and touched by their generosity and their dedication to social justice,” says Joel.

Mahmoud Jaame, the UNSW Muslim students’ chaplain, explains the background of the scholarship. “We started the scholarship to thank the University for having us on campus for such a long time,” he says. “The society has donated money to various projects, and members thought it was time to give back to the University community.”

The scholarship recipient does not have to be a Muslim – it is open to students of all religions. Jaame says that once they had a shortlist of four students, they chose the candidate with the best academic record and social justice commitment.

Joel is not Muslim, but Jaame says he had the most impressive experience.

During his time at UNSW, Joel completed an internship with Amnesty International in the Refugee Casework Team, working with refugees in detention centres. He had volunteered as a telephone crisis counsellor with Lifeline, and at Australian Refugee Volunteers, an organisation that seeks to improve the lives of children and families from asylum seeker and refugee backgrounds.

The UNSW Islamic Society recently presented Joel with the scholarship in a ceremony at one of their special Iftaars, a communal meal celebrating the breaking of the daily fast during Ramadan.

“It was a touching experience for me and I won’t forget it,” Joel says. The society made him “feel so welcome by receiving me with such an incredibly generous and open nature”, he says.

Joel is using the scholarship money in various ways, including travelling to Palestine in August. “I’m looking at trying to gain a better understanding of the Israeli-Palestinian conflict through learning about real-life experiences. It was very eye-opening, and the deep pain and complexity of it has hit me hard,” he says.

Living in a wealthy, privileged country like Australia, Joel believes that people have a duty to fight for social justice at home and around the world. “This scholarship is important as it values and recognises this, and will continue to recognise students for their commitment to social justice and encourage more involvement in these issues,” he says.

The society plans to expand the scholarship in 2019, when it celebrates its 50th anniversary. 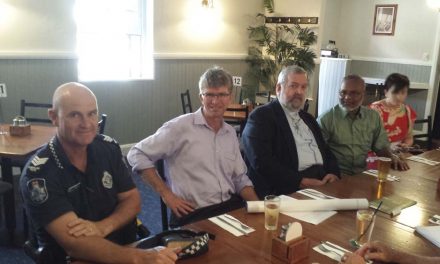