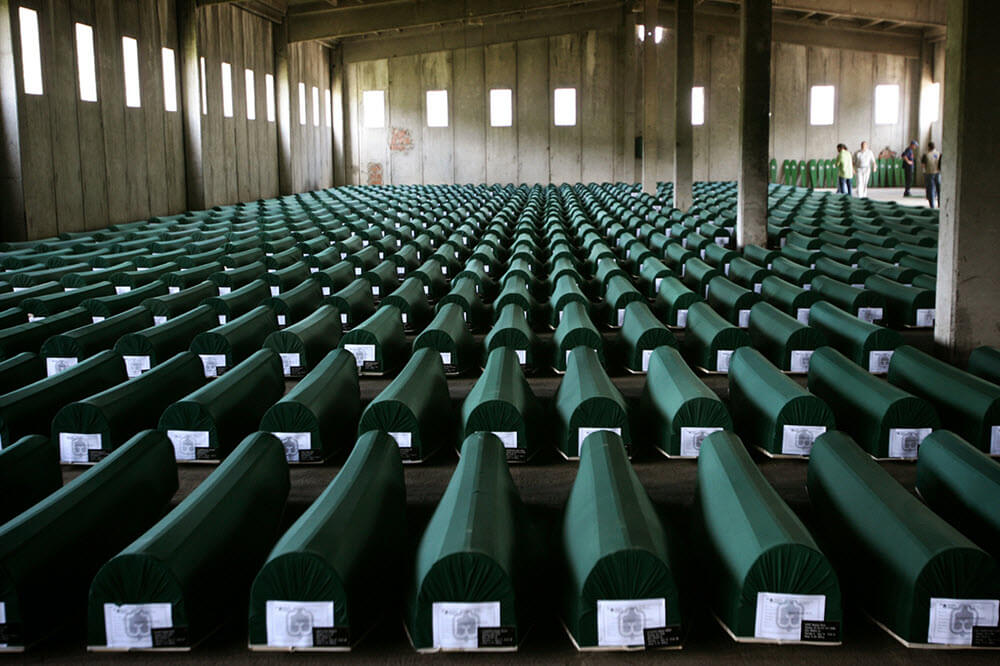 The most dangerous type of human being is an ambitious but intellectually challenged political leader who needs a populist cause to maintain his power. In July 2015 we commemorated one of the fruits of the exploitation of ethnic and religious division to create Serbian political unity – the Srebrenica genocide.

The ambitious leader whose ideological base was failing and who helped bring Srebrenica about, was Slobodan Milosevic. An excellent analysis of the operations of the Serbian nationalists and Mr Milosevic is given in Norman Cigar’s “Genocide in Bosnia” in which the path towards ethnic cleansing and mass murder is traced in some detail. The third chapter of his book, “The Preparatory Phase: Paving the Road to Genocide,” shows how the situation which brought about the genocide, was developed over a couple of decades.

“Vuk Draskovic, author of several controversial best-sellers, such as the evocatively titled novel, Noz (Knife), which was first published in 1982 and reprinted several times, was perhaps the most popular and influential individual in developing such stereotypes early. Set largely against the background of World War II, the Muslim characters in Noz appear mostly as treacherous cold-blooded murderers. What is more, Noz contains an explicit denial of the Muslims’ existence as a legitimate community.” Draskovic also wrote and gave speeches on the Muslim menace. “He lashed out vehemently at the “fury of offensive and intolerant Islam in Bosnia, Kosovo, the Sandzak, and Herzegovina….[at] the vampire-like resurgence of the tradition of the Shariah [religious law], and…the strategy of jihad [holy war] with the goal of creating an Islamic state in the Balkans.” [25]

There was also scholarly reassurance for this stereotypical view from Serbia’s Orientalists who provided “…an academic armature to the campaign against Islam since the 1980s.”  Their blending of scholarship and political rhetoric “…contributed significantly to making hostility towards the Muslims intellectually respectable among broad strata of the Serbian population, particularly because of these scholars frequent presence in the mass media.” [27]

Nationalism was rising in Serbia in the 1980s as the influence of Tito and the communist vision waned. According to Cigar: “Initially, Serbian intellectuals, outside the official government circles, with the backing of the Serbian Orthodox Church, took the lead in developing the nationalist agenda in the early 1980s, following Tito’s death. Central to this was the Serbian Memorandum of 1986, drafted by the Serbian Academy of Arts and Sciences. It was basically endorsement of the pre-war idea of Greater Serbia, thwarted by the Communist victory. It called for “the territorial unity of the Serbian people,” to be achieved by uniting all the Serbs in a single Serbian national state. It claimed “the establishment of the full national integrity of the Serbian people, regardless of which republic or province it inhabits, is its historic, democratic right.” (23)

“It was only with the rise of Milosevic’s own power within Serbia’s League of Communists – as the ruling Serbian Communist Party was called – and his adoption of the nationalist program, that the full weight of the government also became engaged in this effort.” (23)  Serbian nationalism  replaced socialism as the uniting factor in this period, with rallies organized by Milosevic and attended by radical nationalists in 1988-89, focusing on Muslims as the central threat to Serbian religion and culture. He ruthlessly exploited the “us” versus “them” rhetoric as a political tool.

Huge public rallies, well publicized in the compliant media, were used to incite hatred and fear of the Muslim population. “These rallies included slogans such as “Oh Muslims, you black crows, Tito is no longer around to protect you!”  “We love you Slobodan because you hate the Muslims!” and “I’ll be first, who’ll be second, to drink some Turkish [Muslim] blood?” Perhaps most unsettling were the demands that “we want arms,” voiced at such staged rallies.”  (34)  as this was occurring, Milosevic promoted the re-emergence of the previously banned fascist Chetnik political organisations, which quickly set up militias armed and financed by Belgrade.

The state controlled media also mounted a fear campaign, insisting that the Serbs of Bosnia-Herzegovina were threatened by Islam. Milosevic did not have to rely upon friendly media corporations, as he could direct broadcasts. Serbian nationalist rallies were organized in Bosnia-Herzegovina with the support of the Serbian government.

Mirko Jovic, leader of the Serbian Popular Renewal, one of the most extreme nationalist groups, and of the White Eagles Militia emphasized that “we are not only interested in Serbia, but in a Christian, Orthodox Serbia, with no mosques or unbelievers.” The manifesto of this group, prepared by Draskovic, called for a Greater Serbia which would include Bosnia-Herzegovina.

Militias such as the White Eagles carried out atrocious crimes against humanity, but the Serbian government, including Milosevic, minimized these, tried to trivialize the term “genocide” and even denied the existence of concentration camps. Such denial was backed up by the Serbian Orthodox Church, which “convened an extraordinary session of its governing Holy Episcopal Synod specifically to refute such accusations. The resulting communique stated unequivocally that reports of the camps had been based on false information and concocted with the intention of ‘blackening’ the Serbs.” It went on; “we declare, taking full moral responsibility, that such camps neither have existed nor exist in the Serbian Republic of Bosnia-Herzegovina, nor in the Serbian Krajina.” (89)

Of course they did exist. “Redzep Tahirovic, 52, said he was brought to Omarska with hundreds of others on May 26 after Serbs destroyed and ‘cleansed’ the nearby Muslim town of Kazarac. In a sworn statement given to the Bosnian State Commission on War Crimes, he said guards called out a dozen people a day for five days and decapitated them with chain saws near one of the main pits. He said Omarska prisoners were forced to witness the massacre as well as the subsequent execution of 20 non-Serb policeman from Prijedor. “  [ 95. Roy Gutman  “A Witness to Genocide.” The 1993 Pulitzer Prize-Winning Dispatches on the ‘Ethnic Cleansing’ of Bosnia. Macmillan Publishing. NY. 1993]

The recent Russian veto in the Security Council against declaring the massacre at Srebrenica,  genocide, in collusion with the Serbian government, shows that this conflict has not been completely settled. However mass killers like Karadzic, Mladic and Milosevic, the floundering politician, have been brought before the International Criminal Court. The state control of the Serbian media has been eradicated and electronic media has undermined the ability of the perpetrators of genocide to hide their crimes from the population. However the effects of many years of victimhood propaganda directed at Serbs has taken a heavy toll and as comments to articles in The Guardian about Srebrenica illustrated, genocide denial is still rife amongst the nationalists.

It is relatively easy to incite hatred and fear of “the other,” be it immigrants who look different, those who worship differently or who come seeking asylum from persecution. Amoral politicians can use a fear campaign, telling people that “the other” is a threat to their culture, their freedom, their food supply. It is easy to make people feel afraid. This appeals to our lowest characteristics and it has been found effective by many generations of opportunistic political leaders. Those of us who value religious freedom and democracy should not be intimidated when these perverted mutations arise, for they tend to have limited political lives. We must oppose them with the truth. We are told in hadith: “The best Jihad is the word of Justice in front of the oppressive ruler.” (Abu Dawud, Tirmidhi, ibn Maja)