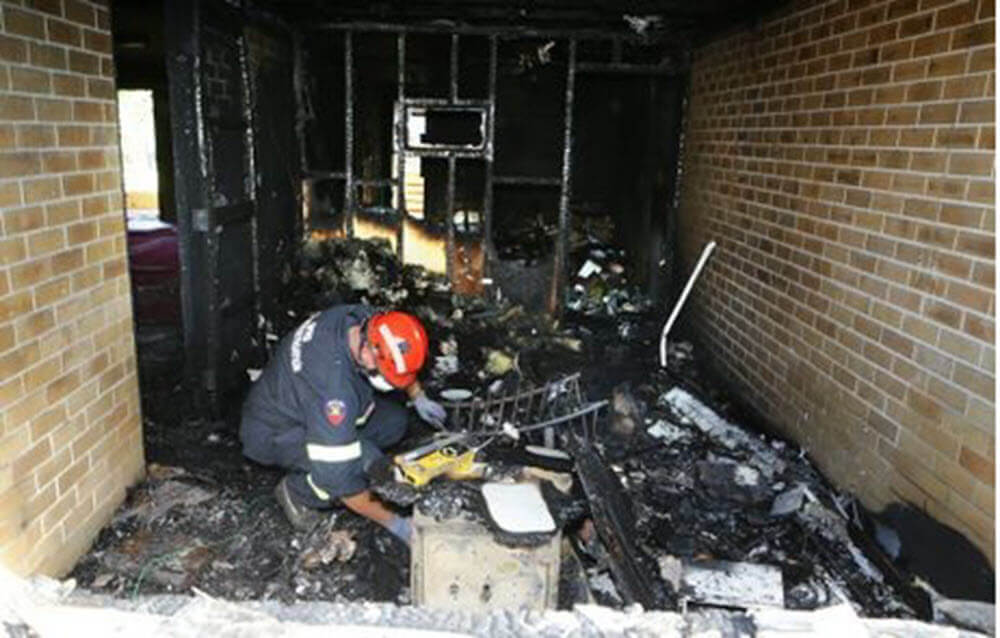 After the first arson attack on the Garden City Mosque on 24 January 2015, the second attempt to burn the Mosque was made on Friday 17 April 2015.

The fire burned Imam’s office to the ground and the neighbouring room burning the partitioning structure and entered to the main prayer area. Everything in the front part of the Mosque including copies of the Qur’an, books, bookcases, sound system, mic and speakers air-condition machines, etc burned to the ground.

The women prayer area at the rear end of the building was also damaged due to flame, heat and smoke. The damage was extensive and left a mark of how the attacker intended to cause maximum damage to the Mosque. If the neighbours did not call the emergency number the whole building would have turned into ashes and the house in the neighbourhood could have been burned as well.

We decided to perform Friday Jumma prayers in the Newington Park, West from the Mosque. The Mayor of Toowoomba Regional Council was kind enough to allow us to use the park. Worshippers were asked to come with prayer mats and make ablution at home.

USQ Senior DVC, Prof Janet Verbyla was to first one to express her sympathy followed by the Vice Chancellor, Prof Jan Thomas. During the day we received around 400 emails, mostly from non-Muslims expressing their dismay to the attack on the Mosque and disassociating the rest of the community from the attacker.

Minister of Multicultural Affairs Queensland, Hon Shannon Fentiman MP was the first government official to phone just before 7am expressing her support for the Muslims community and offer of help in the difficult time. Later, I received a phone call from the office of the Police Minister, Hon Jo-Ann Miller who made a trip to Toowoomba to stand by the community and ensure that the criminal must be brought to justice. I met her at the Neil St Police Station along with a number of key members of the investigating team at 1:30pm, just after the Jumma prayers.

The Open Day of the Mosque and Second Toowoomba International Food Festival was scheduled on Sunday at the Mosque premises. We decided to go ahead with the event as lots of preparation for the event was completed or underway by then.

The Toowoomba Regional Council (TRC) offered the Newington Park for the event. University of Southern Queensland (USQ) offered Clive Bergoufer Recreation Centre as an alternative venue. Given the accessible facilities and unpredictable wet weather condition, we accepted the offer of the USQ. Within very short time we had the rearrange everything from the Mosque premises to USQ. With the generous support of USQ staff and dedication and hard work of the volunteers everything went well, and we had a very successful Open Day and Food Festival on Sunday, 19 April 2015 as per plan.

In the formal speech session of the Open Day of the Mosque and Food Festival all invited speakers reaffirm their support for unity and stood by the members of the Muslim community and their Mosque. The speakers included

Speakers on the Open Day and Food Festival on Sunday, 19 April at the USQ Recreation Centre.