“I am Muslim” Bunga Event at UNSW

A public Lecture with the title “I am Muslim” was organized last Friday, 27 March by the Islamic Society of UNSW in collaboration with Malaysian Student Association, Kelab UMNO Australia NSW (KUANSW).

This event is the first component of an ongoing program called BUNGA “Bidadari Penghuni Syurga” (Angel of Heaven), organized by the Malaysian Organization, initiated by Spiritual Bureau of KUANSW, Munirah Jamaludin as the project manager. This whole program aims to reinforce back Muslim spirit to continue adhering strongly to the Sharia of Islam.

The two hours talk was about building confidence among Muslim in order to gain strength in facing Islamophobia and other challenges specially in countries where Muslims form  a minority.

The speaker emphasized the importance of knowing clearly the difference between peaceful action to defend the sanctity of Islam against acts associated with terrorism.

The turnouts for the event was quite overwhelming with more than 100 attendees from all backgrounds, both males and females.

“It is hoped that this kind of collaboration shall continue in the future to give more benefits in dunya & akhirat to more people InshaAllah” said Khalil Mokhti, the president of KUANSW 2014/2015. 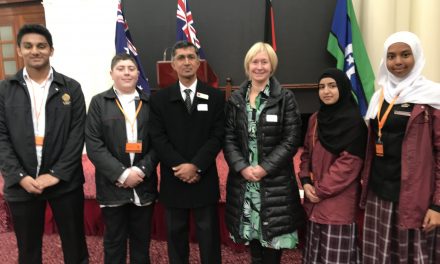 “Your smiling in the face of your brother is charity”