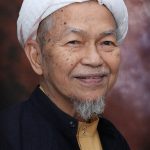 Nik Abdul Aziz, the highly respected and popular Chief Minister of the Malaysian state of Kelantan for 23 years passed away on 12 February 2015. He was 84.

He died on Thursday night which is considered to be Friday, a holy day of the week for Muslims. He was the Chief Minister of the state of Kelantan for 23 years, from 1990 to 2013, under the Pan-Malaysian Islamic Party (PAS). In addition to a highly successful politician, he was a prominent Sheikh (Islamic scholar) with degrees from Darul Uloom Deoband, India and Al Azhar University, Egypt. Although he had a Chief Ministerial house in the city, he always lived at his modest house in the village of Pulau Melaka in the state of Kelantan. His residence was surrounded by a Mosque and a large Islamic school. Local people affectionately called him Tuan Guru (Respected Teacher). He died in the house where he was born.

Nik Abdul Aziz visited Australia several times, once was a guest of the NSW government and I had the opportunity to be with him during this time. I vividly remember then Islamic Council of NSW organised a dinner in his honour; he delivered a Friday Khutbah at the Lakemba Mosque and Sheikh Taj el Din Helaly offered a banquet for his delegation and paid a visit to Auburn Gallipoli Mosque.

Nik Abdul Aziz was born on 10 January 1931 at the village of Pulau Melaka, Kota Bharu, Kelantan, British Malaya which is now the sovereign Malaysia. His parents were Nik Mat Bin Raja Bantar and Aminah Binti Abdul Majid. He was a descendant of Raja Jembal (Jembal royal family) in Kelantan.

He was the second of five siblings and was raised by his single father who was a famous Islamic scholar involved in teaching at local pondok (Islamic) schools. His early Islamic education began in pondok (Islamic) schools in Kelantan and Terengganu. He went on to study at Darul Uloom Deoband in Uttar Pradesh, India for five years. He also obtained his Bachelor of Arts in Arabic Studies and Master of Arts in Islamic jurisprudence from Al Azhar University, Egypt.

Nik Abdul Aziz began his working life as a teacher at various religious schools in Kelantan. Before entering politics, he was teaching at Kelantan’s famous school called Maahad Muhammadi in Kota Bharu. He was able to converse in Malay, Arabic, English, Urdu and Tamil in addition to his native Kelantanese dialect.

Nik Abdul Aziz joined PAS in 1967. He contested and won the federal parliamentary seat of Hilir in a by-election in the same year. He held the seat (later renamed Pengkalan Chepa) until 1986. PAS lost the Kelantan state election in 1978 and he was appointed as PAS state Commissioner in the same year. As the state Commissioner, Tuan Guru began to question the then president Asri Muda’s central leadership of PAS. Finally, in the PAS Muktamar (General Assembly) that year, Asri was forced to resign.

In 1986, Tuan Guru stepped aside from the federal politics and he contested as well as won the state seat of Semut Api holding it till 1995. In 1990 general election, PAS managed to wrest control of Kelantan state government back from Barisan Nasional, the ruling party of Malaysia. In his capacity as party Commissioner (leader) in the state, Nik Abdul Aziz became Menteri Besar (Chief Minister) of Kelantan on 22 October 1990.

Nik Abdul Aziz’s government was re-elected on four occasions in four subsequent general elections in 1995, 1999, 2004, 2008 and until his retirement in 2013. Due to his age and ill health, he willingly retired from the job of Chief Minister on 6 May 2013 and gave the job to his Deputy Datuk Ahmad Yaakob, although he was popularly elected as a Chief Minister.

After relinquishing the position as Chief Minister in May 2013, he continued to be the member for the state seat of Chempaka till his death which he held from 1995.   Over the ensuing two years, Tuan Guru became increasingly ill with prostate cancer and died at 9.40 pm Malaysia Standard Time on 12 February 2015 at his residence in Pulau Melaka, Kota Bharu, Kelantan. He was buried in the cemetery of his village of Pulau Melaka.

Tuan Guru is survived by his wife Tuan Sabariah Tuan Ishak (they were married in 1963) and 10 children. One of his sons, Nik Mohamad Abduh, is a sitting member of Malaysian federal parliament.