Recently, I attended the Together for Humanity (www.togetherforhumanity.org.au) gala dinner at the Sapphire Function Centre in Auburn. It attracted almost 250 Muslims, Christians, Jews, Sikhs and others who came to hear the former Governor, Marie Bashir, plus other extraordinary speakers and also to see a performance by the internationally acclaimed Aboriginal Cultural Dance Group: Minning Minni Kaiwarrine. One of the objectives of the Together for Humanity organisation is to bring together young people who have never met a Muslim, a Jew, a Christian or other faiths before.

The evening commenced with an enthralling speech by student Ibrahim Sakar. He shared that he participated in a Together for Humanity Interfaith program at his school, Punchbowl Boys High School, which was led by Rabbi Zalman Kastel, Sheikh Ahmad Abdo and Taha Allam, an ex-student at the school, and Christian Pastor Greg Lake, who used to be a manager of Christmas Island refugee detention centre. He relayed Greg’s emotional story about a young boy who lost his family and came to Christmas Island as an asylum seeker. Ibrahim also spoke of his pride that he was born in Australia and that he and his family didn’t need to risk their lives to enter this beautiful country. In looking at our multicultural society, he commented on his learning that Judaism, Christianity and Islam all have things in common and that hatred should not be part of society. He concluded how he learned that respect and communication can be all inspiring in how to treat other people.

Another highlight of the evening was simultaneous prayers. Sheikh Ahmed Abdo recited Muslim Magrib prayers in Arabic, whilst Jewish Maariv prayers in Aramaic and Hebrew were delivered at the same time.

In his keynote speech, Together for Humanity National Director Rabbi Zalman Kastel called on all Australians to meet our fellow Australian brothers and sister with respect. ” We need our thinking expanded. We need to be bigger and not allow our fears, or the failings of some of us, to define us or each other.” He added “The Torah, the Jewish bible, states that Jacob, Yakub in Arabic, the grandson of Abraham, was afraid of his brother. It is the same today! Australians fear their fellow Australians.”

Rabbi Kastel also noted: “Things also happen in Australia that worry us. This is our focus tonight. As Sheik Ahmed says, we need to ‘localise thinking’. Yet, as we tell the students this does not always end well. Sometimes we put out a hand of friendship and our hand remains hanging, and our goodwill is not always reciprocated. But we have a simple choice: We can withdraw and let the hate and fear fester, or we can reach out and broaden the minds of some.”

Donna Jacobs Sife, School Programs Director with Together for Humanity for 8 years, shed some light on their activities. She began with a short demonstration of their introductory activity ‘Out of the Box’ which exposes the tendency to make assumptions about those who seem different from ourselves. Donna talked about the slightly different directions Together for Humanity has taken in the past couple of years, such as working with Sutherland shire students, and the specific challenges of working with mono-cultural communities, and the lack of experience and therefore understanding of diversity. She described activities they have developed to find commonality, equality and empathy, so that when two schools from different shires get together they were prepared and able to see themselves as equals.

The enlightening evening concluded with the Aboriginal Cultural Dance Group Minning Minni Kaiwarrine performing a fabulous routine involving music and dance  –  a fabulous way to bring together this Vortex for Peace. 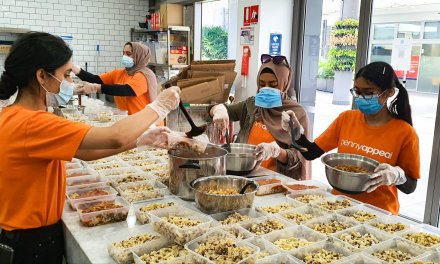