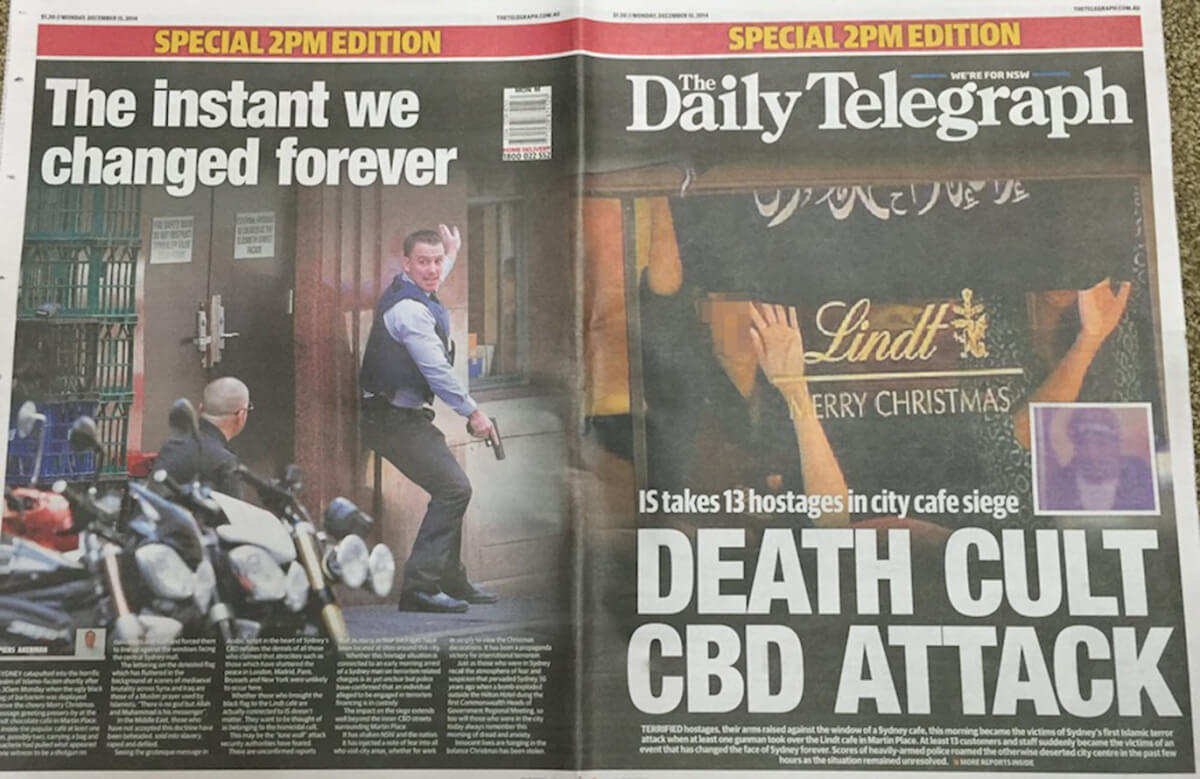 The exploitation by media and some in our community of the events of the Lindt Cafe siege compel a different response.

It’s an ISIS flag. No it’s not. It’s a flag with Islamic writing. Wait Islamic isn’t a language. Sydney is under siege. Well, actually a man has taken hostages in a chocolate cafe in Sydney. The police are working on the situation. No Ray Hadley is… no the police are… no Ray Hadley… Devices have been planted around the city. We’re not sure how we know this because no contact has been made with the gunman but let’s whip people into a frenzied panic anyway. People have evacuated nearby buildings… except for those who were taking selfies one hundred metres from the café and posting them on social media.

The Daily Telegraph revealed yet again that it operates according to a different version of the English language when it referred to a single gunman as a ‘death cult’, ignoring important details like evidence.

Anecdotal stories came through of Muslim women wearing hijab being abused in public because clearly the only way to fight extremism is with racism and bigotry. The leader of the Australian Defence League, an anti-Muslim organization, went to Martin Place to express his rage at Islam. Presumably this was in solidarity with the hostages who would clearly have been delighted to have their indescribable fear and terrifying experience exploited for the sake of scoring some Islamophobia points.

Muslim organisations – weary, under-resourced, under pressure – were ready to condemn, to distance, to reassure because after 13 years of condemning, distancing, and reassuring, the Australian public seems to still be in doubt about Islam’s position on terrorism.

Hostages escaped and the media helpfully publicized it just in case the gunman missed them. Various radio stations took emotional calls from people who were in the Lindt café – not in the café yesterday, or even the day before, but in the café ever, giving a whole new meaning to ‘insider account’.

People around Australia were all feeling sick to the stomach, sucked into a vortex of fear at the thought that the IS threat had reached our country.

To combat the fear among some Muslim women wearing hijab of being attacked in public, an #illridewithyou campaign was launched, quickly going viral and serving as a heartening antidote to the anger, fear and helplessness many felt.

Like all Australians, Australian Muslims too worried about the fate of the hostages, about their friends and family in the city. They also contemplated (and in some cases experienced) the inevitable backlash, and the repercussions of condemning (but doesn’t this just feed the narrative that we are collectively responsible?) or not (but I don’t have the luxury of assuming people will perform basic logic and accept that, dare I say it, 1.6 billion Muslims might just happen to be a diverse bunch of people).

Commentators and experts pontificated and speculated but nobody knew what the gunman wanted, who he was, or what his motives were. Then the experts in the US and UK woke up and we were condemned to hear their long distance theories.

Of course, it was not surprising that the tragic events of yesterday would be interpreted and analysed through the war on terror narrative, even before any information about the gunman had come to light. Once that black flag was sighted, a hostage crisis metamorphosed into a crisis of terrorism, even if politicians, including Prime Minister Tony Abbott, and the police, were not adopting that language.

In the end, the gunman was, according to various reports, a person well-known to the legal system and police, with suggestions that he suffered mental health issues. Despite his violent criminal history and serious charges of murder and sexual assault, he was in the community because he had been released on bail.

There are many people asking the right questions, and while no-one can sensibly claim that this tragedy could have been foreseen and prevented, it is reasonable to ask why it is that, as a systemic issue, the system does not take crimes against women seriously enough?

There is another issue though, too. And that is whether Australian Muslims will be entitled to grieve the deaths of the two hostages and the trauma suffered by the survivors in a way that does not make their empathy and grief contingent on condemning, apologizing and distancing themselves from the gunman.

Some people will no doubt accuse me of insensitivity in raising Islamophobia at this time, assuming that I cannot simultaneously feel incomprehensible sorrow at the senseless death of two innocent people, and also care about how the narrative we allow to play out as a result of this crisis has far-reaching implications on matters of justice, anti-racism, asylum seeker demonizing and individual’s rights.

It is not polemical to say that a mark of honour to the lives of those lost is the capacity to step back and evaluate not only the moment, but what it says about our past and our future.

Expectations that Muslim organisations must apologise or ‘explain’ and comment on the siege demonstrates that 13 years of press releases, press conferences and community activism have not sufficiently undermined the notion that Muslims bear collective responsibility for people who profess to act in the name of Islam.

What is astonishing is that the gunman did not even make such an explicit declaration. The mere presence of the flag-that-was-not-the-IS flag was enough to squeeze the Islamic faith and Muslim community into the witness box.

As a person straddling academia and activism, I am in a position to sympathise deeply with Muslim activists and organisations because they are caught in a double-bind, where to not speak is just as damaging as speaking. The chasm between philosophy, on the one hand, and policy, strategy and the complex, practical work of community leaders is wide.

It is widened even more when a crisis is urgent and the public discourse has not shifted. The hope that you can ‘change the narrative’ may, in the immediate circumstances, seem noble and lofty, but too risky when the price to pay for not playing by the rules is too high.

To even express sympathy and offer condolences becomes tainted. Do we offer as human beings, as fellow Australians, as Muslims? To think that these categories are neutral is dangerously naïve. For all those many Australians who have the decency to see such expressions for what they are – sincerely felt grief as fellow human beings – there are many divisive voices operating in the structures of power in this country that will use such gestures to reinforce the idea – even implicitly, even unintentionally if you will – that Muslims must take responsibility.

I do not know what the answer is, or how to narrow that chasm, other than to say that we are all, in our own ways, trying to do so and that the burden is heavy. And for every organization or leader who acts one way, there are many who will have wished he or she had acted another.

What I do know is that there are those in the Australian community (and, incidentally, media magnates too) who have already demonstrated a callous and vile capacity to exploit the horrors of the past 24 hours to further their Islamophobic agendas.

The narrative must shift or we are condemned to a cycle which does little to illuminate the issues at hand, and denies Muslims their dignity as fellow citizens.

The real work begins when we acknowledge that campaigns like ‘illridewithyou’ are necessary because racism exists, rather than necessary to prove it doesn’t. 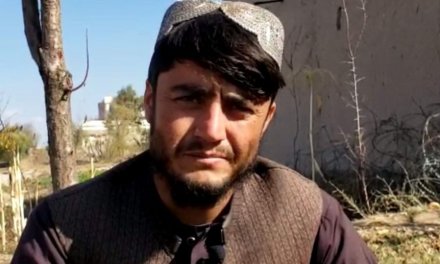 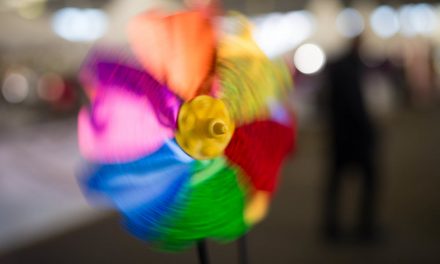 A celebration of the Muslim contribution to Australia.