Tens of thousands of people in cities in Australia came together in solidarity, joining pro-Palestinian protesters around the world in countries such as India, Egypt, Indonesia, Malaysia, Japan, France, London and Hong Kong, after Israel’s most recent attacks on Gaza. The protest was for an end to Israeli illegal occupation and military strikes.

In Sydney, over the three days, numbers higher than 5000 men, women and children in the Muslim and non-Muslim community marched together in Sydney CBD waving flags and signs, calling: “In our thousands, in our millions, we are all Palestinians.”

At the Sydney protest on Sunday 27 July at Town Hall, Australian independent journalist, author and Guardian columnist, Antony Lowenstein said “We all have a responsibility as citizens, human beings to support boycotts, to put pressure on governments and institutions and companies who do business with the Israeli state and to cut that support immediately. It does have an effect.  Boycott the Divestment and Sanctions in a non-violent way to put massive pressure on Israel.”

Israel has rejected a 7 day cease-fire, but on Friday 25 July, both sides agreed to a ceasefire for 12 hours for humanitarian organisations to step in to allow trapped Palestinians in combat zones to seek shelter elsewhere and medical workers to treat the wounded.

The death toll has now reached to over 1000 Palestinian deaths with thousands wounded since Israel’s Operation “Protective Edge” (This number is due to increase since publication). In the past few weeks, Israeli Military have continued to focus on “destroying Hamas’ tunnel network’ in Gaza, escorting journalists on a tour. The human suffering and misery of Gazans continues against the Israeli onslaught, while the world is paralysed to do anything about this great injustice.

In his speech at the Melbourne Rally on 26 July, Nazeem Hussain said “Today, it is only ordinary people like us and the hundreds of thousands of ordinary people around the world in London, in Paris, in New York, in Chicago, in Chile, all across South America, across Asia, across the African continent, and the tens of thousands of Palestinians who are now risking their lives to protest in the West Bank, despite being shot at and killed – Today, all of us across the world are willing to stand up and say

• NO to Israel,
• NO to apartheid,
• NO to ethnic cleansing,
• NO to the murder of children playing on a beach,
• No to the massacre of entire families,
• No to Israel’s 66 year war against the indigenous people of Palestine and
• NO to our government’s complicity in this war.”

Jerusalem. Thousands of Palestinians marched from Ramallah to the Qalandia checkpoint in East Jerusalem, clashing with Israeli forces in the Old City, Silwan and neighbouring areas. Two protesters killed and 100 wounded. Protests were also reported in Nablus and Bethlehem.

West Bank. Palestinians protesting Israel’s military operations were held for a second day demonstration across the territory during Laylat-ul-Qadr. Palestinian officials said that Israeli soldiers have killed four Palestinians in the protest and a fifth was fatally shot by an Israeli settler.

London, United Kingdom. Hundreds of thousands strong gaza march was planned for Saturday 26th July by activists from Stop the War Coalition, the Palestine Solidarity Campaign and a number of Muslim groups. The march will star at the Israeli Embassy before heading to Westminster.

Paris, France. Thousands took part in a rally in Paris, France despite the government issuing a complete ban on Pro-Palestine protests, after protesters attempted to storm synagogues. Francois Hollande, the French President said that the ban was required to preserve public order after clashes between protesters and police. French riot police responded to the protests with tear gas. Authorised rallies did take place in a number of other French cities.

New Delhi, India. In the Indian capital New Delhi about 100 protesters, mainly students, gathered outside Israel’s embassy carrying placards stating “We are with you Gaza” and “Say no to Zionist  genocide”. Protesters also gathered in a number of other cities including Hyderabad and Kashmir. Indian Police has killed a Kashmiri teenager as they began firing on anti-Israel protesters who were also angry about injuries suffered by other protesters during earlier demonstrations.

Jakarta, Indonesia. 500 people marched calling ‘Allahu Akbar’, carrying Palestinians flags and placards. Activist, Adityo Nugroho said “This is a show of solidarity for our Muslim brothers and sisters in Gaza who are being oppressed by Israeli occupiers. We Indonesian Muslims share their suffering and pain.” 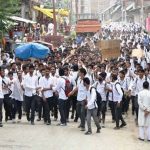 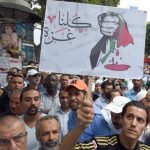 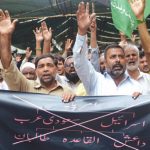 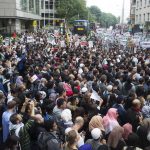