“There is no greater catastrophe than seeing someone you know being killed in front of you. A human slaughtered like an animal? There is nothing uglier than that.”

The images and trauma are still etched sharply in the mind of Idris Musa as he recalls the terrifying ordeal which forced him to abandon his home, family and everything he has known to seek refuge in a safe haven.

It’s a common theme among the thousands who, like Idris, have fled the Central African Republic and become refugees in neighbouring states as ethnic and religious violence sweeps their nation. Idris and others like Zaitoune, Mariam and countless more all tell similar tales of tragedy and woe to Islamic Help officials in Cameroon where we are preparing a major programme to help CAR refugees.

Mention the words ‘refugees’ or ‘humanitarian tragedy’ and the first words likely to come to mind are probably Syria, Iraq or Palestine. Yet while the conflicts in those regions, in particular Syria, dominate the international headlines, the tragedy of CAR is unraveling in the heart of Africa and its effects on those caught up in it is just as acutely devastating as those in the Middle East.

THE STRUGGLE FOR SECURITY

The Central African Republic has been beset by internal strife, rebellions, military coups and economic woes for decades. Ever since independence from France in 1960, it has struggled to find security and stability for its population.

Communal and religious conflict has been simmering for the last decade and in 2012 it erupted in an explosion of ethnic cleansing, violence and brutality of unimaginable proportions. Paradoxically, CAR has been home to refugees from neighbouring countries like Sudan and the Democratic Republic of the Congo but is now experiencing an exodus of its own population.

The United Nations estimates that:

about 550,000 people have been internally displaced

More than 1 in 5 of CAR’s 4.5 million population is displaced

2.5 million in the country are in dire need of humanitarian assistance.

Food and clean water remain in scarce supply in many of the affected areas. Hospitals and clinics have been vandalised and looted and health care provision remains a priority for relief agencies working in the area.

The refugee camps and makeshift shelters in neighbouring countries are overcrowded and under resourced. Living conditions in the camps are dire and food and water scarcity are giving rise to real fears of the spread of disease and epidemic.

Many victims of the atrocities have been Muslims, with documented reports of the slaughter and expulsion of tens of thousands of Muslims from the capital Bangui alone at the hands of the anti-Balaka militia.

Yet despite the scale of the atrocities and warnings by UN officials of “ethnic-religious” cleansing, it has been dubbed the silent or forgotten conflict because of the relative lack of international intervention. For example, the United Nations High Commissioner for Refugees (UNHCR) said it requires US $239 million for its work with the CAR situation. So far, mid-way through the year, it has received just $28 million from donor nations.

Islamic Help is leading an international coalition of charities to help CAR refugees in Cameroon, a nation which now houses more than 200,000 refugees (source: UNHCR June 2014).

The aim is not just to provide immediate aid but establish facilities which will allow 200 refugee families to establish a degree of security and safety, while maintaining their dignity and self-respect. As well as food for the 200 families for a year, the facilities will range from toilets and showers to a mosque and school.

Working with the Islamic Development Bank and the Centre Cultural Des Musulmans Pour Le Developpement   (CCMUD), land has been acquired in Garoua-Boulai and the first stages of clearing it in preparation for construction has started.

The facilities will include:

a health centre and supply of medicines

a temporary school, equipped, for 400 children

Islamic Help’s executive officer Oussama Mezoui, who traveled to Cameroon to prepare the programme, said: “I’ve been to the Syria border and to the Philippines after the typhoon but the suffering and pain I witnessed on the border with CAR is perhaps the worst I have seen.

“The situation is nearly hopeless – thousands of traumatised refugees fleeing violence with nothing but the clothes on their backs, the flesh wounds from the machetes of the anti-Balaka still to heal. Very few NGOs are here on the ground. The world has abandoned these people

“Hundreds continue to arrive each day but the international community is silent. This year the 20th anniversary of the Rwanda Genocide was commemorated – we cannot afford to make the same mistakes with CAR.”

Donate now to reach those in need in CAR. 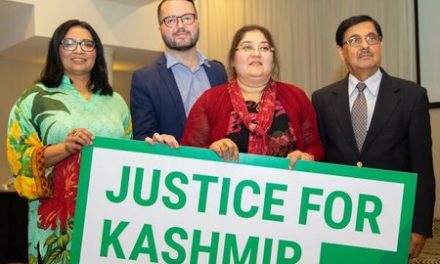